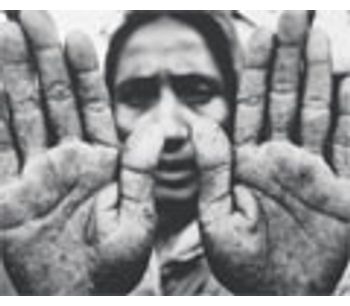 Natural arsenic pollution of drinking water has been reported from over 70 countries world-wide, affecting an estimated 150 million people (Ravenscroft et. al., 2008). About 50 million of these people live in Bangladesh, 30 million in India and 33 million in six other countries of south and south-east Asia. It has recently been recognised that arsenic-contaminated groundwater used for irrigation in these countries poses a serious health hazard to people eating food from the crops irrigated, and that arsenic accumulating in irrigated soils poses a serious threat to sustainable agriculture in affected areas (Heikens, 2006). Rice, the staple food in many of these countries, is the principal crop affected. Little is yet known about the extent and severity of this threat to food production, human health and livelihoods, and assessment surveys are urgently needed.

Source of pollution Arsenic (As) pollution of groundwater is associated with four geochemical mechanisms: reductive  issolution; alkali desorption; sulphide oxidation; and geothermal activity. Reductive dissolution is the most important mode in south and south-east Asia. It occurs where As adsorbed on iron oxyhydroxides in sediments is liberated into groundwater when microbial activity in associated organic matter (e.g., in buried peat layers) reduces the iron to the ferrous form. The As is mainly contained in relatively-unweathered Holocene sediments derived from the Himalayas and related young mountain chains. These sediments are not As-rich, but the element is toxic at very low concentrations. So far as is known, Pleistocene and older sediments in south and south-east Asia are not affected except where sulphidic ores (including coal in China) and geothermal activity occur.

Variability In Bangladesh, the country where the most detailed surveys and research studies have been made to-date, pollution affects aquifers between ca 20–120m deep in Holocene sediments, mainly in a belt across the south-centre of the country. However, within this area, As concentrations vary greatly from place to place. Overall, about 25 percent of domestic wells exceed the national standard of 50ppb As and about 50 percent exceed the WHO standard of  0ppb. However, the proportion of wells within villages that exceed the national standard can range between >90% and 10%. A study of 456 irrigation tubewells in five widely-separated upazilas (subdistricts) showed that more than one-half produced water with >100 ppb As and 62 produced water with >200 ppb.

Rice is particularly susceptible to As contamination because of the large amount of water used to irrigate this crop – commonly 1000 mm or more per crop season – and the anaerobic conditions present in flooded paddy fields. Under anaerobic conditions, As is present as arsenate, the form that is most readily available to plants. In dryland soils, As is readily immobilised by ferric hydroxides. In Bangladesh, As-levels in unirrigated floodplain soils appear to be <10 mg/kg. A survey of 456 irrigation wells showed topsoil As-levels >10 mg/kg at 48% of the sites studied; another country-wide study showed that 21% of samples had levels >20 mg/kg, with a highest level of 81 mg/kg.

Application of 1,000 mm of water containing 100 ppb As adds 1 kg/ha As to the soil per season. Little is lost by leaching, volatilisation and removal in crops. Therefore, most of the added As remains in the topsoil. Many soil factors influence As availability to plants, including redox potential, pH and the contents of clay, organic matter, iron, manganese, phosphorus and calcium-carbonate. Even on seemingly flat floodplains, there can be significant differences in soil texture, organic matter content and duration of seasonal flooding between adjoining ridge and basin sites only a few tens or hundred of metres apart. Some of these properties and constituents also vary significantly within the year in floodplain soils that alternate seasonally between flooded and aerated conditions, and in irrigated upland sites used for paddy cultivation. Thus there can be considerable differences in soil properties that affect As accumulation and availability both between tubewell command areas and within them.

Diurnal and seasonal variations in microbiological activity within paddy fields (particularly by algae) may also influence As accumulation and availability.

Not all the As delivered by tubewells actually reaches the fields irrigated. In As-affected areas of Bangladesh, groundwater is to varying degrees rich in iron. That iron is oxidised when the water is exposed to the air and is then precipitated as iron-hydroxides which adsorb As. At the only two sites for which information is available (both in Bangladesh), As concentrations in water at one site decreasedfrom 136 ppb at the well-head to 68 ppb at the end of the 100m distribution channel; at the other, they fell from 397 to 314 ppb in a 152m irrigation channel.

At the first site, which had been irrigated for about 15 years, topsoil As concentrations decreased from 61 mg/kg in the field nearest the well-head to 11 mg/kg in a field at the far side of the 4 ha command area. At the other site, irrigated for 20 years, topsoil As concentrations in one field decreased from 23.0 mg/kg near the water inlet to 11.3 mg/kg at the far side of the field. With continuing irrigation, these differences within command areas and within fields are likely to increase, such that areas near well-heads and field inlets will become severely contaminated before other areas. These differences within command areas need to be taken into account in soil and crop sampling.

Oxidation-reduction In dryland soils, such as those in which crops such as wheat, maize and most vegetables are grown, As is quickly adsorbed by ferric iron and becomes largely unavailable to most plants. In wetland soils – including the flooded soils in which transplanted rice is grown – As in the arsenate form is readily available to plant roots. In seasonally-flooded soils in monsoon climates, floodplain soils change between the oxidised state in the dry season and the reduced state when submerged in the wet season. Similar changes occur in soils that are flood-irrigated: topsoils are reduced during periods when they are kept flooded and become oxidised when they dry out for crop harvesting and between crop seasons. Thus, As may be present in different forms in the same soil at different times of the year. For rice, the situation is further complicated by the ability of the plant to carry oxygen down its stem and discharge it through its roots forming an oxidised coating (‘iron plaque’) on the roots.

Arsenic taken up from soils by rice accumulates in different proportions in different plant parts in the order roots >stem >leaf >grain. For example, in a pot trial in Bangladesh, 2.4 mg/kg As was measured in rice roots, 0.73 mg/kg in stems and leaves, and 0.14 mg/kg in grain. However, considerable differences in uptake exist between rice varieties and betweenthe kinds of rice grown in different countries.

Rice grain contents ranged between 0.058 and 1.835 mg/kg As in 13 different rice varieties tested in Bangladesh, 0.2–0.46 mg/kg in the USA and 0.063–0.2 mg/kg in Taiwan. The As in US varieties is predominantly in a relatively harmless organic form (dimethylarsinic acid), whereas most of that in Bangladeshi rice varieties is in the inorganic form which is most toxic to humans. These differences between rice types and cultivars need to be taken into account in all studies where rice yields and amounts eaten are measured or compared. Some dryland crops also take up significant amounts of As, and accumulate it in different plant parts: e.g., much more in the skin than in the body of potatoes.

However, dryland crops generally provide a small proportion of the total diet in rice-growing parts of south and south-east Asia. Rice is the crop of greatest concern in the threat which As in irrigation water poses to agricultural production, human health and economic livelihoods in those countries.

There is no single level of soil As that is toxic to plants. Different plant species tolerate different amounts of As in soils. Some (known as hyperaccumulators) can tolerate very high levels of soil As. Even different rice cultivars differ in As tolerance. On soils contaminated by arsenical pesticides in the USA, yield reductions ranged from virtually none in one Chinese cultivar to 80–90% in four of ten US cultivars tested. In the only relevant field study so far reported in Bangladesh, yields of a single rice variety grown under flooded conditions decreased from 8.9 to 3 tons/ha with soil-As levels increasing from 26.3 to 57.5 mg/kg. Yields of rice grown on raised beds at the same site decreased from 8.24 to 5.21 t/ha at soil-As levels of 26.3 and 57.5 mg/kg respectively.

Thus, differences in varietal tolerance and in soil management need to be kept in view in comparing results from different sites and countries. Symptoms of As toxicity in rice include delayed seedling emergence, reduced plant growth, yellowing and wilting of leaves, brown necrotic spots on older leaves and reduced grain yields. A disease known as ‘straighthead’ (because of upright, empty panicles at maturity) or ‘parrot beak’ (because of misshaped grains) is considered to be an indicator of As toxicity in the USA and Australia. Straighthead disease was reported for the first time in Bangladesh in 2006.

Crop yield is not the only relevant criterion to use in considering plant toxicity. The As content of rice grain also needs to be considered because of the large daily amounts of rice eaten by people in many parts of south and south-east Asia (commonly assumed to be 450g/day for a 60kg adult in Bangladesh). The As content of rice straw also needs to be considered where this is fed to livestock producing meat or milk for human consumption.

When arsenic in rice grains is 0.2mg/kg, adults consuming 450g of rice and 4 litres of water per day at the 10 ppb WHO water standard consume 130μg of arsenic per day, which is the FAO and WHO provisional tolerable dietary intake standard for a 60g adult; (persons consuming 4 litres of water at 50ppb national standards already exceed that level before eating any rice). In effect, there is no safe level of arsenic intake from food or water. There is a linear dose-response relationship between arsenic intake and health hazards down to very low levels of As intake. Therefore, efforts need to be made to minimise As intake from all sources as soon as possible. Arsenic causes serious skin lesions, is a potent carcinogen and can cause deaths from a wide range of other serious diseases. Symptoms typically do not appear for 2–10 years from the start of chronic exposure, nd they may also appear long after exposure ceases. They are irreversible.

Much more information is needed on the extent of As-contaminated soils and on As-soil-plant relationships. More appropriate laboratory methods for determining As availability in paddy soils are needed. Soil and crop sampling need to take more account of regional differences in environmental conditions and the complex patterns of soil As contamination between and within tubewell command areas. Although pot trials can provide useful information on soil and plant processes, many more field trials are needed: it is virtually impossible to simulate the physical, chemical and biological environment of a paddy soil in a pot experiment. Considerable strengthening of soil survey, soil laboratory, agricultural research and possibly agricultural engineering institutions will probably be needed in countries with a serious soil-As problem. No adequately-tested mitigation methods suitable for small-scale rice farmers are available. Possibilities that need testing in different environments include: providing an alternative safe irrigation supply; aerating water before delivery to fields; substituting dryland crops; growing rice as a dryland crop on raised beds; using hyperaccumulator plants to remove arsenic; and removing contaminated topsoil.

No comments were found for Arsenic in irrigated paddy soils. Be the first to comment!