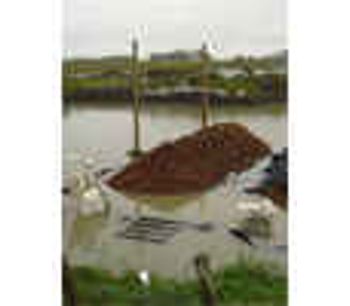 Napier is a city of almost 60,000 population on the east coast of the North Island, New Zealand. Napier City Council planned to upgrade its Awatoto Wastewater Milliscreening (0.75mm aperture) plant to advanced primary treatment (APT) and ultraviolet disinfection to improve the quality of discharge to the ocean through the existing 1600m long outfall into Hawke Bay. The APT plant would generate approximately 6400 tonnes per annum of dewatered primary sludge (at 25% dry solids), and the Council’s goal was to develop a number of sustainable beneficial uses for this wastestream.

A series of trials was undertaken to produce biosolids compost made with primary, undigested sludge produced by conventional settling and also primary sludge produced by the addition of alum as would occur in the proposed Napier APT plant. Readily available wood chips from a large timber processing and pulp plant in the Napier region were used as both carbon source and bulking agent. It was also decided to approach the trial on the basis that the resulting compost could also be burnt as fuel, as well as beneficially used as a soil conditioner.

The paper presents the results of making and subsequent combustion of biosolids compost using undigested primary sludge from both a conventional treatment plant and an advanced primary treatment plant which uses alum as a coagulant. This paper highlights aerated static pile composting as a viable and relatively simple and efficient method of sludge stabilisation but also considers biosolids compost as a fuel source to augment or replace existing fuels in waste-fuel boilers. This non-conventional use of compost as a renewable fuel source in boilers is contrasted in the paper with non-renewable fossil fuels.

No comments were found for Compost Dried Primary Sludge – A Renewable Energy Source?. Be the first to comment!