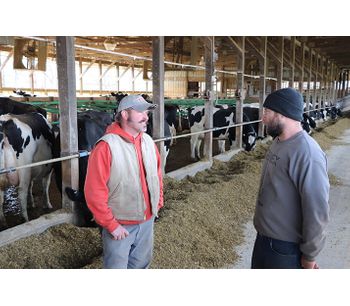 Jerry Volenec and his wife, Jennifer, farm 1,000 owned and rented acres and milk 350 Holstein cows in a limited liability company with his parents, Charles and Marilyn Volenec, near Montfort in Grant County, Wis. Jerry is the fifth generation of his family to farm at Hardscrabble Farms.

In 2000, the Volenecs were milking 130 cows in a double- eight milking parlor. By 2010, they had increased their herd to 199 cows. In 2013, they expanded their parlor to a double-12 and their herd to 350 cows. Jerry Volenec was looking for a better way to detect when his cows were in heat. He also wanted to determine when a cow was sick with mastitis, ketosis or other ailments, and to know if a cow was eating or not.

After meeting with representatives from SCR, Volenec chose to purchase the SCR Heatime HR-LD System, which monitors cows’ rumination and activity. Each cow wears a collar that transmits activity and rumination data from anywhere on the farm a few times every hour. The system provides real-time health monitoring and up-to-date heat detection reports. “We needed a computer management system,” Volenec says. “The only thing we had at the time was AgSource DHIA. Almost all of our cows were being bred through timed AI, and we wanted to get away from that.” Their herd was averaging 25,515 pounds of milk per cow in 2013. “We were looking to boost our milk production and take our herd to the next level,” Volenec says. Four years later, their herd average has increased to 32,597 pounds of milk per cow'.

Sweating the small stuff and paying close attention to detail is important to Volenec and Spink. Since implementing the Heatime system, they have already noticed a number of benefits.

– much easier to detect cows in heat
– fewer days in milk
– time saved because it’s no longer necessary to take daily temperatures on every fresh cow
– reproductive drug costs reduced by 90%
– earlier detection of cows with ketosis, pneumonia or mastitis, which allows for earlier treatment and reduced negative impact on milk production

“We’re finding sick cows up to two days earlier than before we started using the monitoring system,” Spink says. “We had one cow that the Heatime system said she had pneumonia, but she was still eating. Heatime said her rumination was way off. I stuck a thermometer in her and her temperature was 107.” Volenec says they are saving cows and money on their vet bill by catching sick cows earlier. “When a cow gets a little ketotis, you give her propylene glycol — you don’t wait four days and then cut a DA [displaced abomasum].”

Spink also likes that the Heatime software has the ability to send an email to his AI technician’s smartphone to let him know if he needs to stop again at the farm before he goes home. “If the breeding list matches the list from the morning, then he doesn’t need to stop. If there are a couple of new cows on the list, then he knows to stop,” Spink explains. Volenec and Spink say there are a number of things they like about the Heatime system. “One thing that it does that we couldn’t do before is tell us if a cow is eating,” Volenec says. “Now we know. Another thing is you can tell if a cow is not active and not eating — then she is sick.” Volenec estimates the payback for the Heatime system is about one year. “With reduced Ovsynch costs, less labor, earlier detection of sick cows and easier heat detection, it paid for itself in the first year and many times over,” he says.
Read more: https://www.wisconsinagriculturist.com/dairy/cow- monitors-help-dairy-boost-production-health

No comments were found for Cow monitors help dairy boost production, health at Hardscrabble, United States. Be the first to comment!