Using LED grow lights in plant production is a relatively new branch of science. In vertical farming where artificial light sources are used in closed environment it is important to collect data about the individual plant species to be able to produce the right spectrum and light intensity for vegetative and generative growth. Light spectrums can also be used to manipulate the plants growth cycle for example in plant breeding (see blog post: Light Approaches To Speed Up The Generation Turnover) or secondary metabolite contents (anthocyanins, flavonoids, antioxidants, polyphenols etc.).

Why Does Lettuce Turn Red?

When cultivating red baby leaf lettuce in closed environments like vertical farms, without natural light conditions the artificial light quality and quantity plays a key role in production of good quality vegetables. Of course, in the case of red leaf lettuce the deep red color that is caused by the higher anthocyanin content must be produced without affecting the other good qualities of the leafy green. Anthocyanin accumulation is generally linked to the abiotic stress the plant is experiencing or it’s a way for the plant to protect itself against herbivores and plant pathogens. For instance, in the case of high light conditions the anthocyanins serve the plant as an optical filter, redirecting excess light away from the saturated photosynthetic electron transport chain (Gould 2004). This means that the anthocyanins are protecting the plant leaves from harmful structural damage to their photosystems. Raising light intensity is therefore an effective way to increase the leaves anthocyanin content but it’s not a very energy efficient way to do this.

Previously this has been studied by Li and Kubota (2009) and they concluded in their study that both spectrums with enhanced blue and UV-A light increased the anthocyanin content in the leaves of lettuce ‘Red Cross’, but far-red and green light had the opposite effect decreasing the anthocyanin production. Hence, at the end of the cultivation cycle in indoors only enhancing the blue and/or UV-A light spectrum would lead the red baby leaf lettuce to produce anthocyanins which gives them the special red coloration. Using LEDs is the easy and energy efficient way to get quick results in anthocyanin formation in closed environment conditions. This could be easily implemented into the existing indoor growth systems by merely switching on the right spectrum for enhancing the coloration at the end of the growth cycle.

Valoya made internal trials where two light spectrums were used to test this light quality effect with enhanced UV-A / blue spectrum light (S46) and our standard light for vegetative growth with leafy greens (AP673L). Light intensity levels were taken into consideration and tested in a pre-trial. The amount of anthocyanin was measured at the end of the trial with optical polyphenol measuring tool (Dualex, ForceA). The experiment was done with two red baby leaf lettuce varieties: ‘Sadawi’ and ‘Diablotin’, with very similar results.

The light treatments were done with the two spectrums and in the case of AP673L spectrum with three different intensities. The data was analyzed in SPSS with two-way Anova. The homogeneity of variances was analyzed with Levene’s test and the normality of the data with Shapiro-Wilks test.

The results for anthocyanin accumulation confirmed the hypothesis that the enhanced blue and UV-A spectrum will increase the production of anthocyanins in red baby leaf lettuces’ leaves leading to a similar amount as in that of the high intensity treatment. Increasing the AP673L light intensity from 200 µmolm-2s– to 400 µmolm-2s– had linearity trend with increasing intensity (Figure 2). 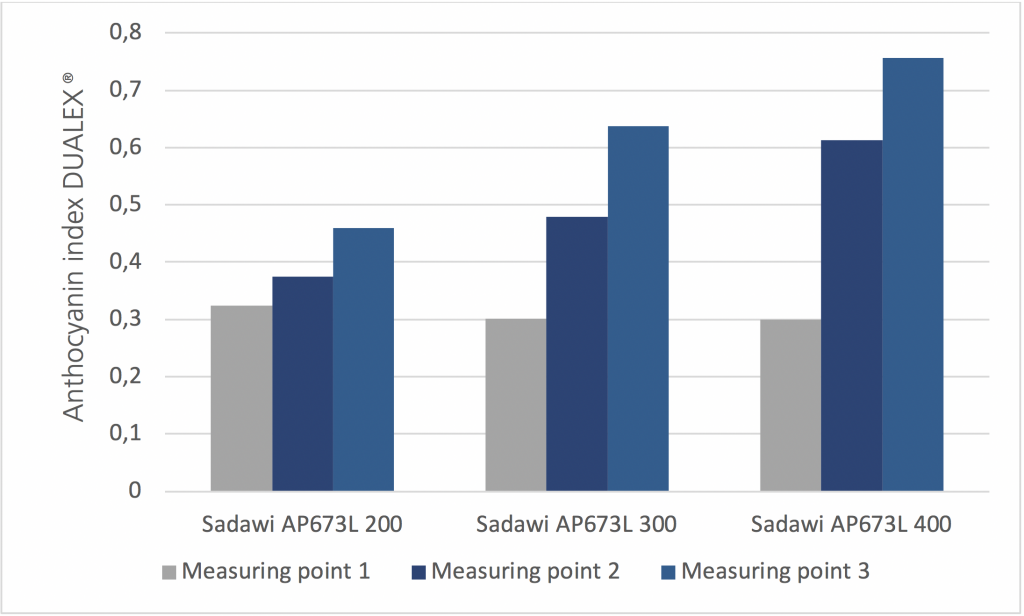 For some lettuce growers the high nitrate accumulation to the leaves during greenhouse cultivation has caused problems and in some studies this has been linked to winter light conditions (Burns et al. 2010). European Union’s standard regulates that the nitrate content of the lettuce grown under cover cannot exceed 4500 ppm due to the implications on human health (EUR-LAX, 2006). In our experiment the nitrate content of the red baby leaf lettuce stayed well below this regulated limit varying from 1130 to 2420 ppm.

This trial is a good example how the vertical farmer can affect not only the growth rate of the leafy greens but also the quality without high inputs on energy costs. Choosing the right spectrum at the right time of the production cycle adds value to the final product and the color of the product is not the only thing that can be affected but also taste, smell and the nutrient content of the leafy greens.

No comments were found for Increasing Lettuce Coloration with LEDs. Be the first to comment!