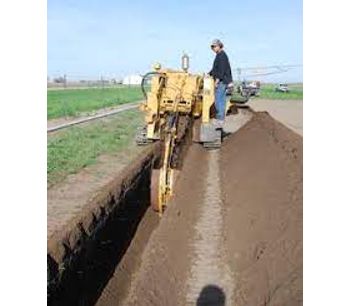 Subsurface drip irrigation; the future of Irrigation is Underground

Placing water beneath the soil surface via buried lines is slowly becoming the 'preferred choice' of many vineyard irrigators. The reasons are many, including the absence of surface evaporation, as well as reduced weed growth, herbicide washout, maintenance, injury, and vandalism found with using conventional water application systems. The advantages of subsurface drip add to reduced cost for water usage, labor, chemicals, and liability for prope

Additionally, critical timing of surface or sprinkler irrigation practices is eliminated because fields areas can be entered by foot or vehicle during or immediately after an irrigation event. It no longer requires letting the field dry or turning the system off during special or planned activities.

The problem of burying drip irrigation lines is not new. Root intrusion and other problems have caused this approach to be limited in its application or abandoned all together in the past. However, new strategies currently available seem to have overcome this obstacle, making subsurface drip irrigation a viable alternative.

The use of subsurface drip irrigation technology may well be the future of irrigation in the coming years and decades. It begins to treat large scale irrigation projects as hydroponics environments. It holds the promise of reducing mold in grapes, weed growth, chemical use, and optimizing water use. It touches on such issues as groundwater contaminates, drainage problems, water resource management, agricultural chemical use, etc.

What is Subsurface Drip Irrigation?

Hard hose products generally have wall thicknesses of 0.75 to 1.25 mm (30 to 50 mils), with nominal inside diameters in the 13 to 16 mm range. The emitter is either manufactured as an integral part of the tubing or is inserted later, and is typically placed at a repeated spacing interval of between 0.5 to 1.5 m. The advantages to hard hose products are: strength and resistance to kinking, punctures, and rodent damage. Also, pressure compensating emitters may be incorporated into hard hose products. A disadvantage of hard hose products can be the initial cost.

With drip tapes, the tubing wall thickness from 0.1 to 0.5 mm (4-20 mils). The thinner materials are more commonly found in single season or throw away applications, typical of strawberry production. The heavier wall materials ranging from 0.35 to 0.50 mm (15-20 mils) are more commonly found in multi-year applications or where the extra strength is required due to stones or other problems identified at the field site.

Some tape products have the emitter formed by the use of glue or other adhesive material used in the manufacturing process, where the actual water channel is made of the tubing material. Other tape or thin wall products have a pre-manufactured emitter glued or attached to the tape wall during the manufacturing process. Emission outlets are typically spaced along the tubing from 0.2 to 0.6 m, with wider outlet spacings having the larger flow path emitters.

Tape or thin products are initially the most cost attractive of the three basic configurations on a per unit basis. The disadvantage of tape products is that they are the most prone to mechanical or rodent damage due to the reduced wall thickness, and thereby reduced structural strength of the tubing wall. However, the use of new generation polyethylene resins are enhancing the mechanical properties of tapes. This is leading to new applications and longer field life.

Porous pipe products emit water all along the length of the tubing. There are literally thousands of places per meter where water weeps out of the tubing. This design has shown resistance to plugging by roots. The disadvantage is its flow path is by far the smallest of the three configurations. This increases the likelihood of plugging by fine particles. It typically has the largest coefficient of manufacturing variability of the three configurations, which can be a major detriment because it prevents high distribution uniformities and high efficiencies (Solomon, 1992).

Other design components of subsurface drip irrigation such as filtration and valving are very similar to those found in conventional drip applications. Proper filtration only protects the emitter from contamination from the inside of the emitter. Unfortunately soil particles and other contaminants can be drawn into the emitter from the outside. This generally occurs at system shutdown, when a vacuum can develop in the lines and draws water and inorganic particles back into the emitter.

To keep from happening, many subsurface irrigation designs incorporate vacuum relief-valves that break the vacuum and keep water and inorganic particles from moving back into the emitter.

System capacity of subsurface drip irrigation should be designed to meet 110 to 120 percent of the highest expected seven day evapotranspiration (Et) rate (ASAE, 1991) and (Conrad, 1992). This allows for unseasonably hot weather, or make-up capacity if you get behind in meeting your crops' irrigation needs.

Water use requirements of subsurface drip may not differ significantly from conventional uses. Evidence suggests water applied on top of the ground through conventional drip systems has a cooling affect through evaporation on adjacent plant material. Even though water use in subsurface drip lacks much of evaporation component of Et, it can have higher transpiration rates due to higher crop temperatures (Phene, et al., 1987). The net difference between surface and subsurface drip systems in total Et requirements is small.

Subsurface irrigation has the ability to apply precise amounts of irrigation water directly to the plant roots. When fertilizers are injected into the water supply they too are delivered directly to the plant roots. In this manner, subsurface drip irrigation has the potential to deliver low fertilizer rates over extended time periods, with increased nutrient efficiency, and lower cost per harvested unit.

When chemicals are added to the water supply there is a potential for undesirable chemical reactions, particularly with phosphorous and some micronutrients. It is always recommended that an adequate water analysis be done before injecting any chemicals containing phosphorous. The introduction of these fertilizers into the irrigation water can lead to the precipitation of phosphates, particularly when high levels of calcium or magnesium are present (UNOCAL 76, 1992). This precipitation will instantly clog emitter pathways and, will cause premature death to the subsurface irrigation system and of course, lead to crop failure.

Studies at the Center for Irrigation Technology

Tape products were first developed as a single season product. At the end of the crop year, the tape was gathered from the fields and burned. As concerns grew about air quality, this practice was outlawed. Then, instead of burning the tape, it was gathered from the fields and trucked to local land fills. Currently, as the capacity of land fills diminished, the cost for disposing of tape products in this manner has risen to the point that it is nearly cost prohibitive.

These environmental concerns and costs associated with the dispersal of used irrigation tapes have forced growers to look at long-term placement and maintenance of subsurface irrigation products. Beginning in the fall of 1989, CIT started examining many of the products available in the market place.

Approximately eight different products have been evaluated for performance over the past five years. These products include porous pipes, drip tapes, and hard hose products with compensating emitters and non-compensating emitters. Tubing and emitters were buried in test plots at a depth of 100 mm, using various emitter spacings along the tubing length and between tube placements. The crop was a tall fescue grass. The soil was a sandy loam and the water source was ground water.

Various field spacings were evaluated to identify the most economical and functional spacing to produce an adequate turf quality. While all the products initially provided sufficient water to the turf, product failure began to show up the first year.

One product failed within the first two months of installation. The product design consisted of a single hole, drilled at a slight angle in the tubing. Grass roots began to chase the water back towards the source, easily plugging up many of the outlets. By the end of the first year other turbulent flow emitters began to show signs of plugging due to root intrusion (Solomon, 1992).

The porous pipe products worked well the first year. However, by the end of the second year they began to produce stress in the turf at the end of the laterals. A closer examination showed the product was clogging from the inside, rather than from root intrusion. Even though the water source was considered very clean and was filtered at 200 mesh, small inorganic particles did pass through. These particles eventually built up at the end of the lines in the extremely small water passages found in porous tubing, and drastically reduced the discharge rate from these sections.

After nearly five years of evaluating subsurface drip irrigation, two products are still producing good quality turf. These two products use two different strategies to maintain performance. The first product, manufactured by the Netafim* Corporation under the brand name Ram*, is a torturous path, compensating emitter. It appears to offer some type of physical barrier to root intrusion.

The second product is manufactured by Geoflow*, and uses a chemical barrier by the brand name RootGuard*. It incorporates the herbicide Treflan* into the plastic emitter. This produces a slow release of the herbicide which has been shown to be effective in stopping root intrusion into the emitter pathway. The manufacturer claims a 20-year life expectancy with the product and guarantees the 'root barrier' for 10 years when properly installed and maintained. Root Guard* treated Drip In* products also produced similar results.

In March of 1993, California labeled for specific tree and vine crops the use of Trifluralin 5* in subsurface drip systems. This herbicide is similar to Treflan*. According to the label, its use is 'for pre-emergent control of susceptible weeds that grow in the irrigation zone blocking irrigation emitters and for the prevention of Johnsongrass rhizomes and other weed roots from encroachment into the irrigation emitter zone or subsurface drip line.' Recommended rates are approximately one pint per acre. These extremely low rates offer the potential use of other subsurface drip products which have failed in the past due to root intrusion. While it is too early to say if this new application will be as effective in stopping root intrusion. the potential is definitely there.

The use of subsurface drip irrigation should reduce herbicide use. Since California traditionallv receives little rainfall in the summer months. weed germination in summer requires irrigation water. If the water is placed beneath the soil surface. seed germination should be significantly affected. This should reduce the need for herbicide application. saving time and money, and minimize the total amount of herbicides applied.

With all the environmental and economic pressures facing growers. subsurface irrigation holds the promise for answering many of these concerns. The increased water use efficiency of subsurface drip irrigation over other methods is substantial (Phene, 1990). This leaves water available for allocation to other uses, such as enhancing environmental goals. Higher water use efficiency also reduces the deep percolation and associated ground water contamination and drainage problems. *Brand names and manufacturers are used for the convenience of the reader and imply neither preference or endorsement of the products named nor criticism of similar products not named.

David F. Zoldoske is the assistant director of the Center for Irrigation Technology at California State University, Fresno.

No comments were found for Subsurface drip irrigation; the future of Irrigation is Underground. Be the first to comment!