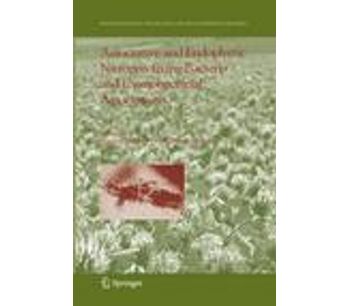 0
Share Share with Facebook Share with Tweeter Share with LinkedIn
Jan. 1, 1900
This book is the self-contained fifth volume of a comprehensive seven-volume series covering both fundamental and applied aspects of nitrogen-fixation research since the 19th century. It addresses the issues arising from bacterial colonization of either the plant-root surface or other tissues as well as their modes of doing so. These associations are less formalized than the rhizobia-legume symbiosis but, as more and more of them are discovered, their myriad of effects on their plant hosts is becoming understood. Among the effects, in addition to often providing fixed nitrogen, plant growth can be promoted and plant diseases controlled. An understanding at the molecular level of the mechanisms by which these bacteria benefit crop productivity is an important issue in agriculture. This book describes the milestones in the discovery of the associative and endophytic nitrogen-fixing bacteria (Azoarcus, Azospirillum, Gluconacetobacter, Herbaspirillum, and others) found intimately involved with cereal crops, forage grasses, and sugar cane. It provides a comprehensive overview of their phylogeny, physiology, and genetics as well as of the biology of their association with their host plants, including tools for in situ localization and population-dynamics analysis. There are also chapters describing the bacterial functions required for a bacterium to be competent and competitive in the rhizosphere; these include chemotactic response, adhesion and motility, enzymes and secondary-metabolite production, and synthesis of phytohormones, which play an important role in the association with the host plants. In addition, the plant’s response to inoculation is reviewed. The book also provides an up-to-date analysis of the different associations of cyanobacteria with fungi, diatoms, bryophytes, cycads, Azolla, and Gunnera, including the complex regulatory network that controls the differentiation of vegetative cells into nitrogen fixing heterocysts. No other available work provides...

No comments were found for Associative and Endophytic Nitrogen-fixing Bacteria and Cyanobacterial Associations. Be the first to comment!