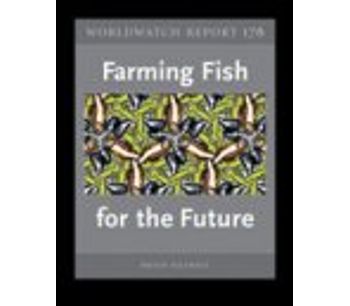 Farming Fish for the Future

From Asia to North America, people are eating more seafood, either because it’s the most affordable form of protein (as in many poorer nations) or because it’s the latest health food trend (as in many wealthy nations). But as the demand for fish rises, populations of both marine and freshwater species are being overexploited, resulting in stagnant or declining catches from many wild fisheries.

As a result, seafood is shifting from being the last wild ingredient in our diet to being a highly farmed commodity. Farmed seafood, or aquaculture, now provides 42 percent of the world’s seafood supply and is on target to exceed half in the next decade. Fish farms are taking up more space on land and at sea, as farmers expand into new streams, bays, and oceans. Fish farming itself has morphed from a small-scale, artisanal pursuit into a large-scale science, with innovations in feed technology, cage design, and fish breeding.

Yet even as we depend more on farmed fish, several crises loom that may jeopardize future expansion of this industry. These include a growing scarcity of fish feed and rising concern about the social and ecological fallout from industrial aquaculture. Poorly run fish farms can generate coastal pollution in the form of excess feed and manure, and escaped fish and disease originating on farms can devastate wild fisheries. From salmon farms in Chile to tilapia farms in China, a narrowing base of genetic diversity means that farms will be increasingly susceptible to disease and other stresses, a wellknown pattern in agriculture that may play out in aquaculture.

But not all fish farming is created equal. Still today,most aquaculture is focused on seaweeds, shellfish, and other species that are low on the food chain, such as carp and tilapia. For much of the world, particularly the developing world, fish farming isn’t so much about profit as about having a steady supply of seafood to eat.Most fish farms are small in scale, rely on few inputs, and may be closely integrated with crop or livestock production. From the Philippines to Bangladesh to the southern United States, small-scale fish farmers often have higher and more stable incomes than nearby crop farmers.

Yet the greatest growth in fish farming today is occurring at the other end of the spectrum: large farms raising high-value, predatory fish such as salmon, striped bass, tuna, and shrimp. Raising these species is an exercise in “reducing” fish to produce fish—that is, in turning certain fish, usually smaller species such as anchovy, herring, capelin, and whiting, into feed for other, typically larger, species. Increasingly, we are fishing down the ocean chain so we can move up the fish-farming chain.

Despite ongoing improvements in feed ingredients and technologies, the rapid growth in fish farming in recent decades has effectively outweighed any gains in feeding efficiency. According to most estimates,modern fish farming is now a net drain on the world’s seafood supply. The global appetite for farmed fish is putting unsustainable strain on the world’s food resources.

As farmers raise more predatory species, a focus on well-designed fish farms will make a critical difference. To avert the looming feed crisis and to take pressure off perfectly edible wild fish, farmers could wean themselves off fishbased feed. And some innovative fish farmers are beginning to redesign their farms to function more like healthy aquatic ecosystems. Farms with high levels of integration can greatly reduce water pollution and disease levels. They can be a cost-effective way to recycle, clean, and store water supplies. They can even help rebuild wetlands and restock wild fisheries.

Properly guided, the explosive growth in fish farming may in fact be the most hopeful trend in the world food system. Compared to raising cows, pigs, or even chicken, aquaculture is remarkably efficient in its use of feed and water. And farmed fish are still generally lower on the food chain and less resource-intensive than the big predatory fish we catch in the seas. Rather than contributing to environmental degradation, fish farming can be a critical way to add to the global diet.

Yet there is no guarantee that aquaculture will move wholesale in a “greener” direction. Supportive government policies and a shift in consumer tastes will be essential to push farmers toward raising more-efficient species, such as carp, catfish, and shellfish. The seafood and aquaculture industries must also play a significant role. So far, producers and conservation groups have only begun discussing standards for farmed fish, despite a proliferation of ecolabels for wild seafood and other agricultural products.Without such standards, even concerned seafood eaters won’t be able to push the world’s fish farms in the right direction.

No comments were found for Farming Fish for the Future. Be the first to comment!