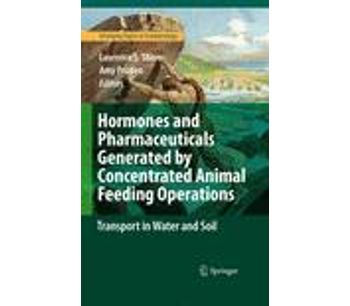 0
Share Share with Facebook Share with Tweeter Share with LinkedIn
Jan. 1, 1900
Hormones and Pharmaceuticals Generated by Concentrated Animal Feeding Operations: Transport in Water and Soil examines how hormones, antibiotics and pharmaceuticals generated from concentrated animal feeding operations (CAFOs) of cattle, poultry, swine and aquaculture are transported in water and soil. Little is known of the environmental fate of the tons of physiologically active steroid hormones released each year. In their own regard, in the last 20 years considerable attention has been given to a wide variety of natural and anthropomorphic agents known as endocrine disrupting compounds (EDCs). Until the contribution of steroid hormones to the environment are better defined, it will be difficult to quantify the exact impact of EDCs. While some advances in the understanding of the fate of these compounds in water has been made, little is known about the processes that govern their transport in soil or how they eventually reach groundwater. As this book discusses extensively, it is somewhat of a mystery how steroids, with their lipophilic nature, strong binding to humic acids and extensive metabolism by soil bacteria, can be transported through even a few centimeters of soil, let alone 20 to 40 meters to the groundwater. With respect to antibiotics, the emphasis is on their fate and transport in the environment and on the emergence of antibiotic resistant bacteria. Impacts on soil ecology, including the impact of antibiotics on the metabolism of other active agents, is also discussed. Similarly, the acaricides and insecticides used in animal husbandry are widely used and their environmental pathways have been studied and have significant impacts on soil and dung ecology. Active compounds with potential environmental impacts, such as growth promoters generated from CAFOs, are described. However, because little is known of their environmental fate, emphasis is placed on defining the gaps in our knowledge and defining their possible effects.

No comments were found for Hormones and Pharmaceuticals Generated by Concentrated Animal Feeding Operations. Be the first to comment!