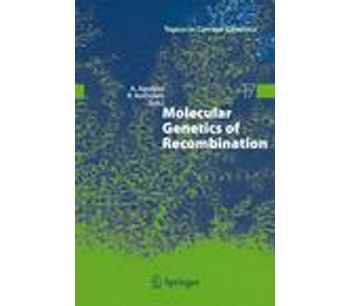 0
Share Share with Facebook Share with Tweeter Share with LinkedIn
Jan. 1, 1900
Genetic recombination is an important process involved in shaping the genetic make up of progeny. Increasingly, it has become evident that recombination is a DNA repair pathway crucial during DNA replication in vegetatively growing cells. It plays a critical role in preserving the integrity of the genome by mediating the repair of DNA damage, which can occur during normal cellular metabolism as a result of oxidative stress, transcription, replication fork stalling or breakdown, or after the exposure to DNA damaging agents. Until recently, much of our knowledge on the mechanisms of genetic recombination has come from studies of prokaryotic and simple eukaryotic fungal systems. However, these studies have now been significantly extended to mammals, such that a comparative picture of the general factors and mechanisms of genetic recombination is beginning to emerge. Detailed genetic and biochemical studies have led to the isolation and characterization of many of the recombination-repair proteins in E. coli and S. cerevisiae, which in turn has led to the identification of homologues in human cells. The link between recombination defects and recombination proteins in a number of tumors as well as in human hereditary syndromes makes genetic recombination a cellular process of key importance not only in basic biology but also in biomedical studies.

No comments were found for Molecular Genetics of Recombination. Be the first to comment!