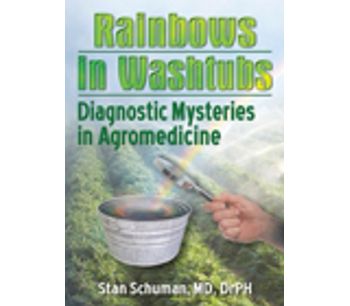 0
Share Share with Facebook Share with Tweeter Share with LinkedIn
Oct. 29, 2007
Real-life agromedical discoveries previously only available in scientific journals and books This entertaining and enlightening collection of true-life agromedical “,detective stories”, demonstrates innovative problem-solving in places as diverse as a desert farm in the Nile delta and a sharecropper’,s cabin in South Carolina. From a schoolyard outbreak of pulmonary histoplasmosis in Michigan to a young farmer’,s wife’,s stress over herbicide exposure and infertility to an Army recruit’,s bout with a botfly boil and a diagnosis of hallucinations, Rainbows in Washtubs: Diagnostic Mysteries in Agromedicine is filled with clinical and epidemiology mysteries solved by one of the pioneers of agromedicine—,Dr. Stanley Schuman. Pulling from his two decades of agromedical experience, Dr. Schuman recounts first-hand the same steps he had to take to get to the source of several of his most difficult and sometimes disturbing cases. This at times suspenseful book provides a wealth of solid information about the impact of environment on the health of clients. As much a textbook as a medical mystery book, Rainbows in Washtubs: Diagnostic Mysteries in Agromedicine provides an ingenious look at the scientific method and problem-solving in the medical field. Some of the puzzling mysteries solved in Rainbows in Washtubs: Diagnostic Mysteries in Agromedicine include: • what suddenly sickened a poor tenant farmer’,s entire family • what caused the rash on the woman’,s fingers • what is the best way to protect workers in Alexandria from toxic chemicals used in farming • what caused the rampant rash among migrant workers • what were the parasites infesting a pastor’,s family • what caused the infertility of the farm wife • what caused the near death of the hiker • what caused the golfer’,s diarrhea • and more! Rainbows in Washtubs: Diagnostic Mysteries in Agromedicine is an informative, entertaining read for physicians, researchers, agricultural extension workers, farmers, and anyone who enjoys real-life medical detective stories.

No comments were found for Rainbows in Washtubs: Diagnostic Mysteries in Agromedicine. Be the first to comment!