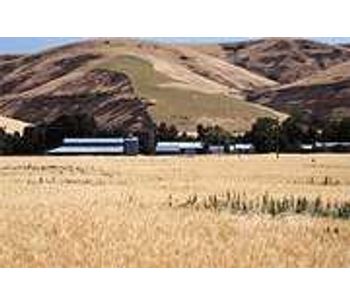 ARS explores ways to keep carbon in the soil

Agricultural Research Service (ARS) scientists are testing out alternative ways of tilling the soil and rotating crops to see if they can help wheat farmers in Oregon sequester more carbon in the soil and reduce greenhouse gas emissions.

Soil organic carbon plays a major role in how well a cultivated field holds moisture, provides nutrients and remains productive. That can be a problem in eastern Oregon because the soils are relatively low in organic carbon. Wheat farmers there traditionally plant winter wheat one year and leave the field fallow for a season, using traditional methods to plow before planting.

Hero Gollany, a soil scientist at the ARS Columbia Plateau Conservation Research Center in Pendleton, Ore., is looking at three scenarios that may help. In one field, she is comparing levels of carbon dioxide, methane and nitrous oxide emissions released from the traditional 2-year rotation with an alternative 3-year cycle of no-till winter wheat, followed by a second crop of no-till winter wheat, followed by sorghum. She is measuring residue yields, soil conditions, and greenhouse gas emissions, taking measurements throughout the year. Because precipitation usually increases nitrous oxide emissions, she also collects data after any rain or snowfall.

She also is examining whether two other cropping systems sequester more carbon. In one, she grows winter wheat continuously and seeds the untilled soil directly each year. In the other, she grows wheat one year, leaves the plot fallow the next year and uses sweep tillage and a rod-weeder to control weeds. This is a low-impact method of plowing 4 to 5 inches into the soil. It is less destructive to soil structure than conventional tillage, and helps retain water and organic matter. Previous experiments show a 14 percent increase in soil organic carbon if growers use sweep tillage rather than the traditional moldboard plowing.

Results are being evaluated as part of an ARS project known as GRACEnet (Greenhouse gas Reduction through Agricultural Carbon Enhancement network) in which researchers at more than 32 sites are examining strategies to help reduce agriculture's climate change footprint. The project supports the U.S. Department of Agriculture (USDA) priority of responding to climate change.

No comments were found for ARS explores ways to keep carbon in the soil. Be the first to comment!