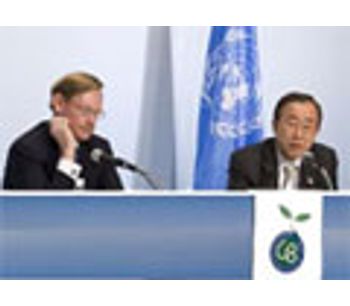 As the leaders of the Group of Eight (G-8) countries gathered in Hokkaido, Japan, today for their summit meeting, United Nations Secretary-General Ban Ki-moon reiterated his call for urgent action to tackle three key challenges the world is currently grappling with. Efforts to address the food crisis, climate change and the slow progress towards reaching the anti-poverty Millennium Development Goals (MDGs) by their target date of 2015 “so far have been too divided, too sporadic, and too little,” Mr. Ban told a joint news conference with World Bank President Robert Zoellick.

Mr. Ban was speaking with reporters at the end of the first day of the outreach session of the summit of the world’s richest nations, taking place at the mountain resort of Toyako on the northern Japanese island of Hokkaido.

“The time has come to take a very different approach,” he added. “I can promise you that the UN stands ready to assist on all these global challenges as the world’s universal, multilateral platform for making and implementing concrete actions.”

The Secretary-General cautioned that progress towards achieving the MDGs, especially in Africa, is off course.

Earlier this month, the MDG Africa Steering Group – comprising the leaders of multilateral development organizations and chaired by Mr. Ban – unveiled a series of recommendations, which show that Africa can still reach the MDGs, he said today.

“To do so, however, countries must agree to deliver on their previous ODA [official development assistance] commitments,” Mr. Ban said, noting that no new promises are necessary. To help Africa, he said that donor nations must boost their contributions to reach the $62 billion per year by 2010 target agreed upon at the G-8 meeting in Gleneagles in 2005.

Some $10 billion is needed to boost basic services to improve maternal, newborn and children’s health, while funding 120 million insecticide-treated bed nets for Africa would show the world’s commitment towards stamping out malaria deaths by 2010, he said.

But “addressing the MDGs is not enough,” the Secretary-General said. “We must recognize the interconnectedness of extreme weather patterns, empty grain and rice storage houses, and poverty.”

He stressed that soaring food prices are threatening to roll back gains made in development, calling on world leaders to provide what is immediately needed, such as food and inputs including fertilizer for this year’s crop. They must also take longer-term action, including agricultural investment, lifting export restrictions on food and slashing agricultural subsidies in developed nations.

Undercutting progress on achieving the MDGs and improving food security, Mr. Ban warned, is global warming. “We tend to think of climate change as something in the future,” he said. “It is not.”

Its effects are visible now, mostly in Africa where worsening drought and changing weather patterns are impeding steps taken towards reaching the MDGs, he said. “We must take action now.”

“We need to set a long-term goal of at least cutting by half emissions by 2050,” he told the press, adding that short- and medium-term targets that promote technological and market change is also crucial. Increased funding is key to help developing countries with their adaptation and mitigation endeavours.

The Secretary-General called for an “investment approach” to addressing the three crises. “Every dollar, euro, or yen invested today, as well as every ounce of effort, is worth ten tomorrow, and a hundred the day after,” urging G-8 leaders to spark this joint task.

He arrived in Japan yesterday from his native Republic of Korea, where he paid his first official visit since becoming Secretary-General early last year. Wh

No comments were found for As G-8 leaders gather in Japan, Ban Ki-moon urges action on three key challenges. Be the first to comment!