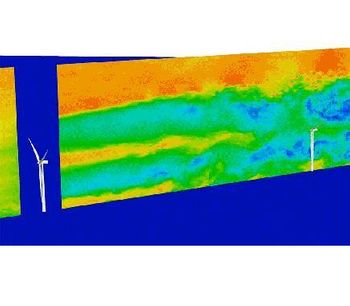 At its theoretical peak, the Summit supercomputer at the U.S. Department of Energy’s Oak Ridge National Laboratory in Oak Ridge, Tennessee, can calculate in one second what it would take the entire human population 305 days to do. That formidable mathematical horsepower comes in handy when modeling highly complex systems — such as how gusty sea winds hamper the performance of powerful offshore wind turbines.

That’s why engineers at GE Research looking for ways to design next-generation wind turbines were thrilled in August when the DOE gave them access to Summit to allow them to take their concepts through their paces. Specifically, they wanted to analyze a kind of air current — called low-level coastal jets — that whip across the Atlantic off America’s northeastern coast where operators are planning to build a number of large offshore wind farms.

A granular computational analysis of those gusts could squeeze more energy from the turbines in just the right manner without overloading them — boosting reliability, curbing maintenance costs and spurring the gradual shift toward more renewable energy. With wind power — both onshore and offshore — expected to provide 20% of the country’s energy by 2030 according to the DOE, this math really matters.

Coastal low-level jets are currently not well understood but are of serious interest to the wind power industry, mainly because they’re tricky to harness. In most atmospheric conditions, faster winds flow farther from the ground. But low-level jets accelerate from the ground up, reach the maximum wind speed and then slow down as they rise farther. Many scientists believe the jets come from the way wind flows from land to sea. While over land, coastal winds have to fight the ground’s opposing frictional force, but as they blow out to sea — a comparatively smoother surface — they occasionally speed up.

Grappling with the interactions of low-level jets on an entire wind farm means modeling those airflows in both finer detail and at massive scale. The calculations are so complex because each individual wind turbine further disturbs the jets and adds a degree of entropy into the equations. That combination demands herculean number-crunching power — supercomputer-scale processing like that of Summit, a machine able to outperform 150,000 Xbox Ones. “With a supercomputer, you are no longer restricted to looking at how the wind flows through one blade,” says Jing Li, lead aerodynamics engineer at GE Research. “You can get that information for dozens, if not hundreds, of turbines in a big wind farm.”

Li and her team will employ advanced modeling techniques developed by the National Renewable Energy Laboratory for its ongoing Atmosphere to Electrons (A2e) research initiative. The core idea of A2e is that to accurately describe the world at different scales, you need different models for each one of them. “At the broadest level you have a climate model, then you drill down to a weather model, then to a wind model, to a wind farm, to a single turbine, to the flows over each individual blade and how the myriad wakes of each turbine affect the overall performance of the farm,” explains Richard Arthur, senior director of digital engineering at GE Research.

“When computational scientists build models based on physics, it is necessary to limit the numerical complexity to what can be pragmatically run on available computer systems, so traditionally we employ different physics models for each scale,” Arthur adds. “Integrating those multiple models across scales demands supercomputing.”

The work by Li and her team will come in three chunks over the next 12 months. First, they’ll mine reams of wind data — for example, from this field campaign gathered by Massachusetts Clean Energy Center — to identify specific low-level jet patterns found in the northeastern coastal regions. Next, they’ll run simulations to model the strength and speed of the jets over time and at heights that extend beyond the measurement range with fine spatial and temporal resolutions to resolve the energy-carrying atmospheric turbulence. Finally, they’ll use the outputs from those simulations to model the airflow through a theoretical wind farm — ultimately calculating optimal load capacities and power production.

But there’s more. The advances to modeling frameworks for complex turbulent flows that Li and company are exploring could apply to many applications. “This is a grand-challenge-scale problem,” Arthur notes. “Turbulence manifests in a multitude of engineering and science problems, from wind, weather and climate to engines, generators and even healthcare applications, such as vascular blood flow or superconducting magnets in an MRI.”

For now, Li can’t wait to take the analysis of coastal jets to the next level. “During my second year of grad school, I went to a conference in Copenhagen, and it was the first time I saw an offshore wind farm,” she recalls. “I was mesmerized by the sight of the spinning blades. I couldn’t have imagined that a few years later I’d have the opportunity to study them and contribute to the offshore wind research community - so this is all very exciting!”

No comments were found for Digital Wind: High-Powered Computing Helps Scientists Grasp Airflows at Offshore Wind Farms. Be the first to comment!