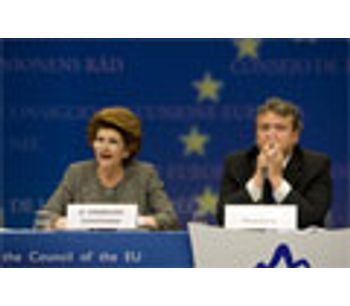 Source: Slovenian Presidency of the EU 2008

At the meeting of the Agriculture and Fisheries Council, chaired by Slovenian Agriculture Minister Iztok Jarc, EU Ministers discussed the proposal for a Regulation concerning the placing of plant protection products on the market. Mr Jarc gave a report on the progress achieved by the Slovenian Presidency on this dossier, and returned the dossier to the working level. The Ministers also discussed high agricultural product and food prices and the possibility of adopting additional measures to stabilise agricultural markets. “The compromise proposal of the Presidency ensures a high-level of human, animal and environmental protection and at the same time facilitates the competitiveness of the European agriculture sector,” emphasised Mr Jarc, going on to say, “Significant efforts were made to find a compromise between the different interests of Member States and considerable progress was achieved.

After two years’ work on the dossier at the Council, the Slovenian Presidency has succeeded in drafting a compromise proposal supported by the majority of Member States.”

The compromise proposal for a Regulation prepared by the Presidency includes a number of provisions protecting the health of humans, animals and the environment. The Regulation encourages the replacement of the most hazardous plant protection products by safer alternatives; in the event of specific national environmental protection or agro-technological circumstances, Member States will be able to reject the registration of certain products or restrict their use; professional users and producers of plant protection products will be required to keep records of the use of these products; the Regulation will also prevent the duplication of tests on vertebrates.

Mr Jarc also stressed the importance of defining the criteria for the approval of active substances, in which their impact on the long-term food supply in the European Union should be considered.

Mr Jarc commented, “An insufficiency of appropriate active substances may lead in the opposite effects: lower effectiveness of plant protection products and consequently increased use of these products, increased environmental pollution and lower hectare yield. Considering the worrying situation on the world’s food markets and the high prices of foodstuff raw materials and products, this is a development we cannot afford.”

Due to the fact that the Regulation has been discussed in the Council and in the European Parliament almost two years it is necessary to ensure an early implementation of the reform in the pesticide field. The Presidency will return the dossier for discussion at the Council working level, so that appropriate solutions to unresolved issues may be found.

On the basis of the Presidency report, the Agriculture Ministers discussed the high prices of agricultural products and food. “It is an important cross-sectoral issue which calls for a sustainable joint EU response,” stressed Mr Jarc. In its discussion paper, the Presidency points to the reasons for the high food prices, such as climatic change, with frequent extreme weather phenomena, the increasing demand for food in developing countries, the growing world population, the production of biofuels and rising energy product prices.

Mr Jarc underlined, “There are some who say that high prices can constitute an opportunity for farmers since high prices should encourage increased production and yield greater profit for them. On the other hand, high prices are a serious problem for net importing countries, especially developing countries.”

Last year, under the common agricultural policy (CAP), the EU adopted specific short-term measures to reduce prices in the EU, such as increasing the volume of arable land by abolishing mandatory set-aside, increasing milk production quotas for 2008, reducing buffer stocks and export refunds and suspending import duties on almost all cereals.

In the current ‘health check’ of the common agricultural policy, the options being considered are: permanently abolishing the set-aside requirement, gradually abolishing milk quotas by 2015, adjusting market price aid in the cereal sector, and making the transition from support for energy plants to more effective solutions to bolster the bio-energy sector – without, however, adversely impacting on the production of foodstuffs and feedingstuffs – including the production of second-generation biofuels.

At their working lunch, the ministers discussed the contribution of research towards adapting the agricultural sector to climate change. The meeting was also attended by the European Commissioner for Agriculture and Rural Development, Mariann Fischer Boel, and the European Commissioner for Science and Research, Janez Potočnik. The Presidency has drawn up a discussion paper, pointing up questions relating to the need for this kind of research and additional funding, exchanges of experience between Member States and transfers of knowledge to farmers, as well as the suitability of proposed solutions in the context of the review of the common agricultural policy.

No comments were found for EU agriculture ministers discuss proposals for strict pesticides regulation. Be the first to comment!