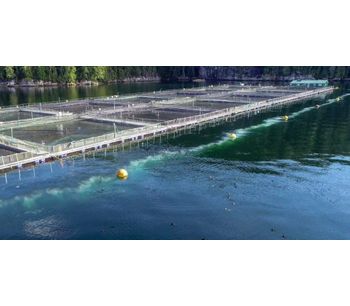 As global consumption of seafood increases, aquaculture becomes increasingly important as a way to feed the planet. The drive for more aquaculture operations is now increasing the demand for sustainable, eco-friendly operation and management solutions.

As the global demand for seafood increases exponentially every year, ocean ecosystems are put under increasing pressure because of overfishing. According to the World Wildlife Fund (WWF), overfishing is one of the most significant drivers of declines in ocean wildlife populations.

The WWF mentions that the number of overfished stocks has tripled in the last half century and today, fully one-third of the world’s assessed fisheries are currently pushed beyond their biological limits, citing data from the Food and Agriculture Organisation of the United Nations.

Overfishing is also closely tied to bycatch – which is the capture of unwanted sea life, while fishing for a different species. This too represents a significant marine threat that causes the needless loss of billions of fish, along with hundreds of thousands of cetaceans and sea turtles. The damage done by overfishing goes beyond the marine environment – billions of people rely on fish for protein, while the industry is the principal livelihood for millions around the world.

Given the unsustainable demand that is being placed on our marine ecosystems, aquaculture may be the most viable answer to our needs. Technology has made it possible to grow food in coastal marine waters and the open ocean, using net pens in the water, or tanks on land.

The USA’s National Oceanic and Atmospheric Administration states that aquaculture can be used to produce food and other commercial products, restore habitats, replenish wild stocks, and rebuild populations of threatened and endangered species.

The methodology is rapidly growing in popularity, with farms coming up in the region as well – the United Arab Emirates (UAE), Saudi Arabia (KSA) and Egypt have prominent operations that supply high-quality stock throughout the GCC and beyond.

In fact, aquaculture is currently the largest single source of fish supply in Egypt, accounting for almost 65% of the total fish production of the country, with more than 99% produced from privately owned farms.

Although the development and expansion of modern aquaculture began in Egypt two decades ago, it has been known since the beginning of written history, with tomb friezes dating back to 2,500 BC illustrating the harvest of tilapia from ponds. A traditional form of aquaculture, known as ‘hosha’ has been commonly practiced for centuries in the Northern Delta Lakes region, until a few decades ago.

Saudi Arabia is also home to some of the largest aquaculture operations in the world, with the National Aquaculture Group (NAQUA) operating farms along the Red Sea coast.

In order to ensure the success of these operations – and by extension, ensure the longevity of wild stocks – proper marine protection should be in place to help manage operations. For example, aquaculture farms require specialised markings for vessels operating in the area to provide safe night navigation and to avoid costly damage to farming infrastructure and stocks.

As farming operations move further offshore, we can assist by designing reliable, robust products for demanding environments to suit all requirements, while ensuring that all products fall in line with the necessary regulations.

Our next-generation mooring system, Ecomoor, is particularly suited to aquaculture operations as it is an environmentally friendly alternative to traditional mooring systems. The system does not damage the seabed like traditional mooring chains, as the mooring line floats in all marine conditions and environments, making it an ideal solution for sensitive operations like aquaculture farms.

Furthermore, because it is lightweight the system is easy to install and maintain, requiring no heavy lifting and handling equipment. This not only reduces transportation and installation costs at the same time, but also provides a neutral buoyancy advantage, as compared to other systems.

In addition, the Ecomoor system comes with Moorforce, Ecocoast’s proprietary software that helps operators understand the forces placed on marine buoys and aids in mooring requirements, generating data that would be crucial for the operations and maintenance of an aquaculture operation.

Finally, we are currently developing a new mooring system that includes heavy duty attachments that will permit farming in extreme weather conditions, without floats detaching or lashings/locking pins breaking down. This versatile system can be used in conventional surface or sub-surface long-line farming. This will be launched before the end of the year, so stay tuned!

No comments were found for How aquaculture increases demand for sustainable solutions. Be the first to comment!