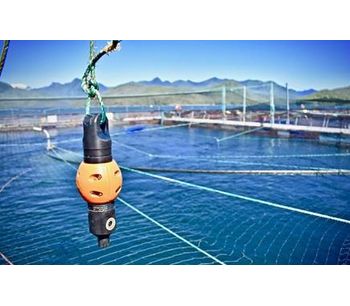 As humans we don’t often think about how much oxygen is contained in the air because there is always more than enough for us to breathe. Underwater things are a little different. Oxygen concentrations are constantly changing due to changes in temperature, salinity, wind and currents. Fish take up oxygen over their gills and have minimum oxygen requirements that must be met for them to breathe without enduring any stress.

On a fish farm, where there are thousands of fish in a single pen, it is vital to monitor oxygen levels to ensure that fish are living within optimal conditions to reduce stress and ensure an efficient grow-out cycle. But do oxygen levels vary across such a small  area? If so, by how much? And how many sensors do you need to accurately capture these fine-scale changes?

The research took place at an Atlantic salmon farm in Nova Scotia. Using Innovasea’s wireless aquaMeasure sensors deployed 2 meters deep in each of the farm’s 19 pens, the study measured temperature and oxygen levels every five minutes between September 2018 and December 2018.

The results show there are several factors that influence oxygen levels and that these factors can affect pens differently depending on the layout of the farm and the surrounding water currents. The factors include things like tide, pen infrastructure and even the fish themselves.

Burke’s key take-away from the study?

“If we only monitor one or two pens and depend on those results alone, we miss what the fish are experiencing in other pens.”

Burke says each pen has its own individual environment and should be monitored as such. Farmers consistently balance feeding and oxygen levels, so having information in real-time from each pen is critical to ensure they are feeding each pen in optimal conditions.

Dissolved oxygen levels affect metabolism, welfare and growth in fish. When being fed, fish use up oxygen during the metabolic process, resulting in lower oxygen levels in the water. If fish are fed when oxygen levels are low, it can lead to reduced fish growth and mortality. It can also increase stress and therefore vulnerability to disease.

Findings such as these are critical in advancing the industry and implementing regulations that ensure fish welfare and maximize efficient production cycles.  Just recently, the government in Chile mandated real-time environmental monitoring for ocean-based fish farms. As technology improves, government and industry agencies are likely to require higher standards of water quality monitoring.

As for the future of environmental monitoring on farms, Burke expects reliance on technology to increase dramatically.

“It will become routine to have extensive networks of oxygen sensors – linked to oxygenation systems, if needed, at the site – as well as fluorometers if the site is prone to harmful algae blooms. As ocean temperatures increase and coastal waters become deoxygenated due to climate change, it is more important than ever to make sure we are monitoring aquaculture farms properly to optimize fish welfare and production.”

No comments were found for New Study Highlights Need to Broaden Environmental Monitoring at Fish Farms. Be the first to comment!