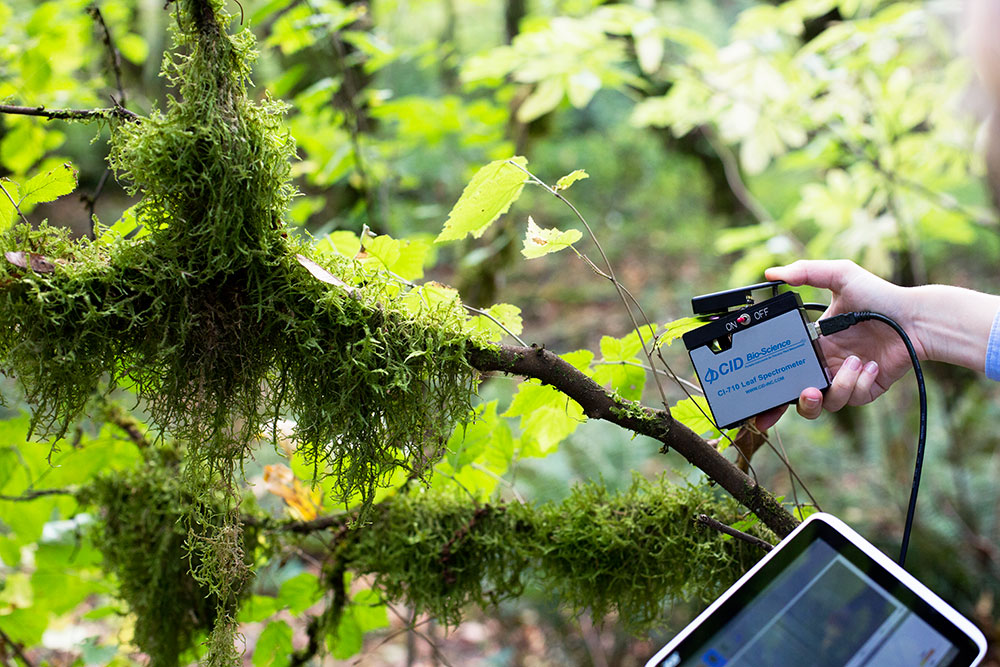 The CI-710 Miniature Leaf Spectrometer is designed to measure the transmission, absorption, and reflection of light by biological substances within a wide range of wavelengths that cover visible and Near Infra-Red (NIR) light. Transmission and absorption spectrum measurements are the most common applications of spectrometers. The spectrum can be used for the quantification of chemical concentrations, color analysis, the study of photochemical reactions such as photosynthesis, and the quantification of physical or optical properties such as film thickness, index of refraction, and extinction coefficient.

Part of the power of the CI-710 Miniature Leaf Spectrometer is its ability to scan and record across a wide spectrum, from 400-950 nm. Many researchers wish to analyze multiple, discrete peaks or integrate across wavelength bands. These functions are readily accomplished with the SpectraSnap! software that ships with the CI-710.

Other users of the CI-710 have expressed a need to rapidly estimate vegetation properties using published and accepted indices. These indices include: estimates of greenness like the widely-used Normalized Difference Vegetation Index (NDVI); plant stress, such as the Plant Senescence Reflectance Index (PRSI); pigment concentrations, including carotenoids and anthocyanins; and leaf water status estimated by the Water Band Index (WBI).

Now, with SpectraSnap!, these indices and others can be easily and simultaneously measured. SpectraSnap! gives the CI-710 user the power of many single-measurement instruments in one package. Researchers can also add their favorite algorithms to the library.

Why SpectraSnap!
Since its introduction, CID's compact and light-weight CI-710 hardware has simplified the process of collecting spectral signatures from plant tissue. Now SpectraSnap! simplifies data analysis by offering several real time computations in an intuitive and easy-to-operate system.
Save Time
Insert the sample into the CI-710 hardware and the selected calculations are instantly displayed along with raw and averaged spectroscopic data. Press Stop to pause the live stream or Save to record the on-screen measurement. It's that easy.

Ready to use out of the box. Flexible when you need it.

Choose the calculations to display from a convenient selection of popular vegetation indices (NDVI, PRI, CRI, ARI, etc) and/or define your own calculations to target specific areas of interest.

CI-710 is a USB (Universal Serial Bus) powered spectrometer with operating software, and a leaf probe attachment. A broadband light source is attached on the leaf probe and can be conveniently placed in two positions for transmissive or reflective measurements. The spectrometer module takes the light from the leaf probe attachment through a fiber optic cable, disperses the light by a diffraction grating, and projects the wavelength dispersed light onto a CCD array. Each pixel of the CCD array thus corresponds to a specific wavelength of light. The operating software, SpectraSuite, displays the light intensity of each pixel of the CCD array.

Five spectroscopic measurements can be performed by CI-710:

Intensity (I) shows the electrical response of each CCD pixel to a specific wavelength of light coming off the fiber optic cable. It is essential to collect the intensity of the light source at the full wavelength range, referred to as the reference spectrum in SpectraSuite as it is required in calculating transmittance, absorbance, reflectivity, and irradiance.

Absorbance (A) is related to the transmittance as A = - log T = -log(It / Io). Absorbance is commonly denoted in optical density (OD) as it is linearly proportional to the amount of light absorbing sample in the light path length (Beer-Lambert law). For example, in a standard 1-cm cuvette, a sample with an OD of 2 is twice as concentrated as a sample with an OD of 1. But note that the intensity of light transmitted from a sample with an OD of 2 is only 1/10 of that from a sample with an OD of 1. Transmission and absorption spectrum measurements are the most common applications of spectrometers. The spectrum can be used for the quantification of chemical concentrations, color analysis, the study of photochemical reactions such as photosynthesis, and the quantification of physical or optical properties such as film thickness, index of refraction, and extinction coefficient.

Reflectivity (R) is the fraction of incident light that is reflected from a sample. Depending on the purposes of the study, reflectivity can be measured for reflection at a specific angle from the sample, or the entire reflected hemisphere. The leaf probe attachment of CI-710 is not designed to measure the directional reflectivity. Nonetheless, it can be used to measure the absorption spectrum of surface substance of reflective or opaque samples.

Irradiance (Ir) is the amount of energy at each wavelength from a radiant sample. The relative irradiance is related to the radiant energy per unit area (watt cm-2) illuminating the sample. Common applications include characterizing the light output of incandescent lamps, or sunlight.

How to Use it

Simply clamp the CI-710LP onto the desired leaf to yield a full complement of spectrographic data on leaf transmission, reflectance, and absorbance.

The CI-710 has many applications in agriculture and environmental studies; including monitoring moisture content in leaves and protein content of crops.

The CI-710 has a compact optical bench coupled to a Linear CCD array detector. It accepts light energy transmitted through single strands of optical fiber and disperses the light via a fixed grating across the CCD array, which is responsive from 400-950nm. The CI-710 can be connected to an object such as a leaf, and can be scanned to obtain graphic outputs or digital data readings of the transmission, reflection and absorption spectra.

No reviews were found for CID - Model CI-710 - Miniature Leaf Spectrometer. Be the first to review!