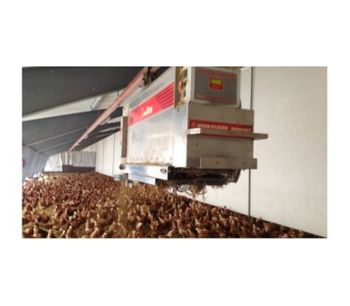 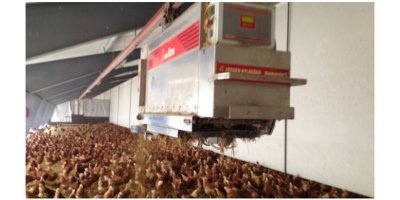 From Bedding and Feeding Systems

Roughage for organic egg-laying hens and sows. Experiments show that the feeding of roughage reduces feather pecking and cannibalism among egg- laying hens significantly. The hens will be more healthy and more productive. Feeding of roughage like for example corn silage to sows provide better saturated and thus less stressed animals.

JHminiStrø
The JHminiStrø allows floor feeding with roughage such as corn silage in stables with sows and egg-laying hens. The roughage is mixed in and dosed in the robot from the JHminiStrø mixer. The mixing container of the mixer has a powerful, vertical screw for mixing the material. JHminiStrø robots for corn silage are stronger and with a bottom chain for the handling of the material.

Benefits
The automatic distribution of corn silage with JHminiStrø allows simultaneous feeding of all animals. The JHminiStrø robot can pick up material at various times from up to four different filling stations. This allows the distribution of both food and employment material such as straw.

Initiative TierWohl
The JHminiStrø system can be used to meet the new requirements of initiatives concerning increased animal welfare. The roughage is ideal as both saturation food and employment material, when it is distributed in the free range areas of sows, but can also be combined with the distribution of straw.

No reviews were found for JHminiStrø - Feeding Roughage. Be the first to review!