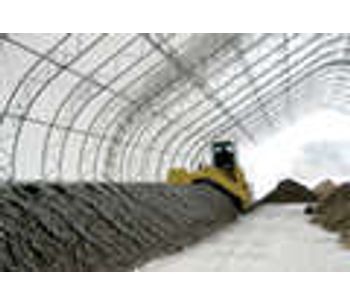 Building a Business with Nutrient Management

The Jacquier family owns 275 acres, and rents an additional 2,500 acres for cropping, to support a herd of 830 cows. The family began composting three years ago as part of the farm’s nutrient management plan, as well as to determine the market for compost in the area.

“In 2003 the Environmental Protection Agency (EPA) released Confined Animal Feeding Operation (CAFO) regulations, and an advisory board was put together in Connecticut,” recalls Bob Jacquier of Laurelbrook, which is considered to be a CAFO. “Studies were conducted on nutrient management for the state to determine how many acres were available for manure spreading. Based on the results, which showed that there wasn’t enough land, we decided to investigate composting as an option for managing and exporting our nutrients.”

Besides regulatory issues, the Jacquier family had several other interests in exploring composting. The cost of transporting manure for land application was climbing, in part because of odor concerns in the rapidly populating area. “We also wanted to enter a value-added market,” says Jacquier. “The price for milk is set by the market, and has been declining in recent years. With composting, we’ll be able to charge a tip fee for incoming materials, and produce a valuable soil amendment.'

The farm initially began composting using a bucket loader to turn material on a gravel pad. Once it was determined that composting was a viable business plan, the Jacquiers applied for and received grant funding from Connecticut Department of Environmental Protection (CT DEP), EPA Nonpoint Source Pollution Control Program and the Environmental Quality Incentives Program (EQIP) of the Natural Resources Conservation Service.

No comments were found for Building a Business with Nutrient Management. Be the first to comment!