For three weeks every month, Ray Archuleta captivates audiences with a few handfuls of soil. He begins with two clumps, dropping them into water. The soil from a farm where the soil isn’t tilled holds together, while the tilled soil immediately disperses, indicating poor soil structure. Next, volunteers from the audience — mostly farmers and ranchers — pour water over a soil that grew a variety of crops, and it runs right through. A sample of tilled soil that grew only corn is like a brick, and the water sits on top. Water is the most precious resource for growing crops, and having a soil that is unable to absorb water is crippling for farmers.

The implications of Archuleta’s demonstrations are obvious to food producers, who see the fate of their acres in those clumps of soil. The message is powerful, and producers drive home knowing that soil isalive, that it can be sick or healthy, and that healthy soil can do some pretty amazing things — like make a farm more resilient to drought, sequester enormous amounts of carbon, reduce erosion and support an ecosystem that’s teeming with life.

Archuleta, a conservation agronomist with the U.S. Department of Agriculture’s Natural Resources Conservation Service, popularized these soil health demonstrations that by his estimates have reached more than 100,000 farmers and ranchers in the U.S. alone. He’s a pioneer of a movement that has recently stolen the spotlight from conventional agriculture.

Known as the soil health movement, it is a management philosophy centered around four simple principles: reduce or eliminate tillage, keep plant residues on the soil surface, keep living roots in the ground, and maximize diversity of plants and animals. Some immensely successful farmers have ascended to celebrity status in the agricultural community preaching these principles. They are growing more food while drastically reducing their use of inputs like herbicides and fertilizers, which is the ultimate strategy for becoming more profitable. Benefits on top of profitability include enhancing the health of ecosystems we depend on. The possibility of a win-win for farmers and the environment is a driving force for the movement.

“This whole movement emerged out of desperation,” says Archuleta. Over 10 years ago, he thought of a farmer friend of his and wondered, “Why can’t he make a good living on 600 acres of prime irrigated ground, and why can’t he bring his son into the operation? It starts dawning on me that something is wrong with modern agriculture.”

In many ways, that “something” is that farming has become too expensive. Over the past several decades, farmers have increasingly paid more for inputs like equipment, seeds and chemicals, while commodity prices have remained stagnant or even fallen. Sociologists call this phenomenon the “double squeeze,” as the rising cost of doing business, combined with meager returns, has put pressure on profits. Combined with soils that are deteriorating from centuries of tillage and monoculture, these trends exacerbate the vulnerability of a profession that is already fraught with uncertainty. For farmers, the blend of poor soil and the double squeeze makes it harder to survive an extended drought or bounce back after a few failed crops. On a larger scale, it threatens rural economies, natural resources and food security alike.

But in 2011, Archuleta saw an opportunity to reverse these trends. Jason Weller, then the NRCS chief of staff, had assembled Archuleta and a group of other NRCS employees from around the country in Greensboro, North Carolina to create a plan for the federal agency to engage in the broader sustainable food movement. The soil health movement had been bubbling around the country for two decades. The Greensboro team, and ultimately the NRCS leadership, decided the time was right to scale it up into a coordinated, national effort to advance soil health.

Birth of a Movement

We don’t know who first uttered the term “soil health” in the U.S., but Jay Fuhrer started saying it in the 1990s. As a district conservationist with NRCS in Bismarck, Fuhrer was dismayed by the declining status of the soil in his region. He used to spend his summers building sod waterways on farms in North Dakota. 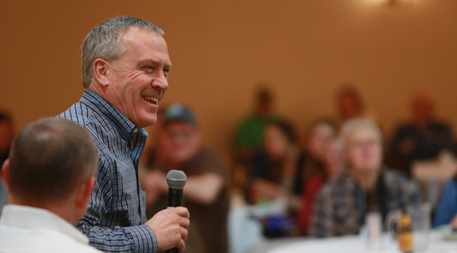 Jay Fuhrer, who began promoting soil health in the 1990s, speaks to attendees of the Midwest Soil Health Summit in 2016. Photo courtesy of Sustainable Farming Association

The answer is what Archeluta demonstrates in his presentations today: Degraded soil has a hard time absorbing water. That means much of the water a farmer needs to grow crops runs off and eventually pollutes streams and rivers, taking precious topsoil with it.

“So we got together one day and we kinda looked at each other,” Fuhrer says, recalling a meeting at the field office in the early 1990s. “We asked, ‘how much further can we bring this system down?’ It got pretty quiet in that room. Honestly at that time, we didn’t really know what changes we were going to make, we just knew that what we were doing wasn’t working.”

So Fuhrer and the other NRCS conservationists in Bismarck dubbed themselves the “Soil Health Team.” Fuhrer doesn’t recall why the term “soil health” popped into his head, or where he heard it for the first time, but the team began to educate itself about ways to restore and maintain soil function. They read academic papers and learned from successful producers in the region, and then they brought what they learned to other farmers and ranchers in North Dakota through workshops and farm tours.

Ray Archuleta knew something special was happening in North Dakota. He heard about Gabe Brown, a farmer and rancher, turning his operation around after a few years of failed crops by eliminating tillage, growing diverse mixes of crops and changing how he grazed his cattle to more closely mimic the way bison once grazed the prairie. And he almost completely eliminated his chemical inputs, helping him to become more profitable.

Archuleta watched Fuhrer and Brown start to redefine agriculture in North Dakota. And when they popped into his mind years later in Greensboro, North Carolina, what had been an undercurrent suddenly took a turn toward the mainstream.

Today, government agencies, food and agribusinesses, universities, and environmental groups are all pivoting to support and capitalize on the possibility of a paradigm shift in agriculture, and they are investing millions of dollars in the process. With thousands of farmers already on board, powerful partnerships have taken on the challenge of filling knowledge gaps in the science and economics of soil health that prevent other producers from taking the plunge. USDA announced a US$72.3 million soil health investment to help farmers adapt to and mitigate climate change. A pledge of US$4 million from the Midwest Row Crop Collaborative, founded by Cargill, the Environmental Defense Fund, General Mills, Kellogg Company, Monsanto, PepsiCo, The Nature Conservancy, Walmart and the World Wildlife Fund, will augment an on-farm study and demonstration effort of soil health practices led by the farmer-led Soil Health Partnership. And the Walton Family Foundation provided a US$626,000 grant to the Soil Health Institute to quantify the economic implications of soil health management systems. Money is coming from all sides to support this movement.

One of the most unexpected outcomes of the soil health movement is that groups that were once fighting each other are now working together to achieve the same goal. In the fall of 2013, for example, representatives from Monsanto and the Rodale Institute (“the organic pioneers”), came together with the Walton Family Foundation, the Nature Conservancy, Cornell University, farmers, federal agencies and numerous other stakeholders to draft a strategic plan for advancing soil health as the cornerstone of land use management decisions. This meeting, led by the Farm Foundation and the Samuel Roberts Noble Foundation, has helped spawn numerous initiatives, like the Soil Health Institute, with the goal of leveraging these powerful relationships to research and spread soil health.

What is the secret of soil health that enables such diverse groups to unite under the same banner?

There has been little analysis of soil health as a movement, but one possible reason for its success is that it nestled right in the middle of a Venn diagram of two ideologies that are so often at odds. To productivists driven by the “feed the world” mentality of agribusiness and yield-maximizing producers, soil health means bigger and healthier plants and animals. But it also jibes with environmentalists’ goals of improving water quality, sequestering more carbon, using less pesticide and herbicide, and providing greater habitat for biodiversity. At least for the moment, it truly seems to be a win-win.

Beyond that, however, the answer — one that can be instructive to other environmental issues — seems to lie in crafting and delivering a message that can be championed by all sides. 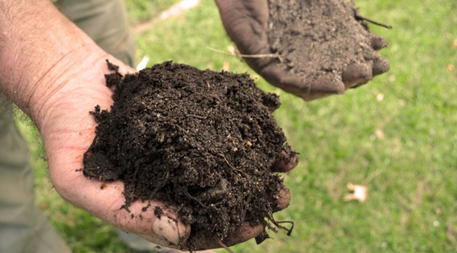 Throughout the 1990s and early 2000s, the push by NRCS and the research community was to advance “soil quality.” This term worked fine for scientists, because it is easy to define and measure, but farmers didn’t connect with soil quality.

“Health denotes life and function. Quality is like the quality of a couch or something,” says Archuleta. “Farmers intuitively grasp soil health.” That minor turn of phrase made all the difference.

Similarly, soil health is aligned with many of the concepts of agroecology, but agroecology is not a staple of the American farmer’s lexicon. The soil health terminology made it possible for agroecological farming practices to emerge in mainstream American agriculture.

The success of soil health can also be attributed to the way the message is delivered. Demonstrations and conferences are the core infrastructure of the movement. High-profile farmers and ranchers speak and write to thousands of producers around the country every year, sharing stories of how soil health has revolutionized their operations. Inspired by these talks, demonstrations and articles in farming magazines, producers experiment with soil health practices on their own farms. Pockets of formal or informal regional producer networks have popped up all around the country, and they exchange what they’ve learned through experimentation. The movement has taken on a life of its own.

With momentum now spilling into countries around the world, global attention to soil is at an all-time high. The United Nations designated 2015 the International Year of Soils. The race is on to understand soil in all of its complexity and to engage in agriculture that will prepare soil for the tough times ahead. Still in its infancy, the soil health movement will take continued effort and resources from all sides to maintain momentum. But everyone is at the table together, and the table is set for a revolution.

No comments were found for How a new way of thinking about soil sparked a national movement in agriculture. Be the first to comment!