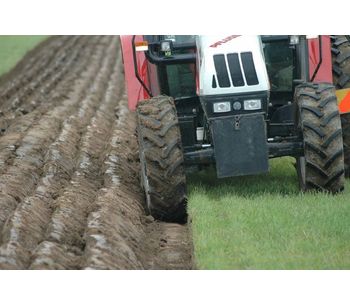 Soil compaction is becoming a major issue worldwide. Not only in the Netherlands but globally the soil is deteriorating very badly. Soil compaction is a form of soil degradation, in which the soil structure is lost because the soil is compressed. This global problem is still underestimated and causes problems for agriculture, nature, and climate. Furthermore, soil compaction leads to loss of yield, loss of quality, and reduced water storage.

A soil with good physical properties is composed in such a way that both small and  large pores are present in the soil. The moisture is retained in the small pores, and the large pores ensure an adequate supply of air and the removal of excess water. It is also important that growing roots do not encounter too much resistance in the soil, so a root system can develop that can absorb sufficient water and nutrients from the soil.

Soil compaction reduces soil life, permeability to water and air, and the possibilities for plant growth. Soil compaction can reach a depth of more than one metre. Soils that are regularly ploughed often have a compacted layer at ploughing depth (approximately 25 cm). The degree of compaction depends on:

A lot of research is being done into soil compaction. Piet Peters, Education and Research Associate at Wageningen University & Research, explains the consequences of soil compaction and also explains alternative tillage methods. ‘The machines used by farmers are getting heavier and heavier and causing the soil to come under a lot of pressure. Density is related to the structure of the soil. The soil is composed of clods and in between are the pores.`

‘So if farmers have an overly compacted soil, they have to make sure that they loosen that compacted layer. Balance in the soil is also important. There must be a good balance between the pores and the soil fauna. The soil fauna is actually responsible for the development of the soil (clods), which provides structure. If the structure is inadequate, the soil must be treated. Treating the soil requires a lot of time and effort and a lot of commitment on the part of the farmer.’

‘Prevention is therefore better than cure. It is important that the soil is cared for and managed in the best possible way. By this, I mean exercising extreme care during tillage. This includes the correct methods of ploughing, sowing, irrigation, and the protection of the crop and the soil in which the crop grows. In addition, there are many alternative tillage methods available nowadays, improving the soil quality and reducing the risk of compaction.’

‘Ploughing is the traditional way of preparing a soil for sowing and has its advantages and disadvantages. Ploughing means the soil is inverted to ensure that new seeds can be planted in a “clean” soil. Ploughing is in itself a good way of loosening the topsoil. This is because the infiltration rate of moisture increases with ploughing, and after ploughing the top layer of the soil dries faster. Ploughing reaches a depth of approximately 20 to 25 cm. The moment of tillage is very important with ploughing. It is best to plough when it is dry. The reason for this is that a dry soil has much higher load-bearing capacity than a wet soil.`

`It is therefore important for farmers to be able to properly assess when to plough the land. If ploughing takes place at the right time, it can reduce the compaction problems. The disadvantage of ploughing is that at some point a so-called plough pan will form. A plough pan is a compacted layer just below the ploughed soil.’

‘A trend that is now very much on the rise is No Tillage. No Tillage means not working the soil. In other words, you burden the land with as few machines as possible. This minimises soil compaction, which keeps the soil in good condition for a longer period of time. In addition, No Tillage is becoming increasingly important in relation to food security and food production. This type of tillage is intended to stimulate food production. A considerable amount of research into the results of No Tillage is conducted nationally and internationally. Not only the consequences for compaction are studied, but also the influences on infiltration and soil life.’

Testing in the field

‘To test which tillage method works best and to see what the effects of the respective tillage methods are on compaction, we use the penetrologger. One way of determining this is by directly comparing four fields . No tillage is used in the first field. The second field is ploughed. Non-Inversion Tillage is applied in the third field, and No Tillage to the fourth field. The penetrologger measures what happens in the meantime. This allows us to properly determine the effects of the various tillage methods and respond accordingly.’

`In our view, this device is very user-friendly and very useful for both experienced users and new users. You quickly become familiar with the device. The data is reliable and reproducible. The device has been designed in such a way that it doesn’t really cause any problems when used in the field. The penetrologger also has a handy GPS function and moisture sensor. We make extensive use of the GPS function. When performing a subsequent measurement, you can easily look up the coordinates and compare both measurements.’

In the construction industry, the penetrologger is frequently used as field measuring equipment. Read more about this in the following article: Trafficability of construction sites.

Want to learn more about the Penetrologger or order one? Check the extensive product page or contact one of our specialists.

No comments were found for Soil compaction, an underestimated problem. Be the first to comment!