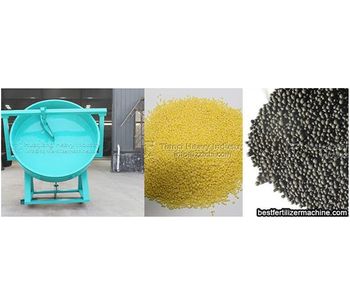 Disc fertilizer granulator machine working principle:
The raw meal powder is uniformly wetted by the atomized water in the mixer to form a spherical core having a uniform particle size, and then fed into a ball plate for ball formation. The moisture of the ball should be controlled at 12-14%. Most of the water should be added in the twin-shaft mixer. Only a small amount of supplementary water is added to the ball plate, and the amount of water added is controlled to be about 0 to 3%. The dry powder granulation is directly added to the ball-forming plate, and the proper amount of water is sprayed. The raw material nucleus enters the spherical disk and is subjected to centrifugal force, friction and gravity in the disk, and moves along the parabola. Due to the cohesiveness and plasticity of the material, the cores are bonded to each other and gradually grow up during the movement. When the inclination angle of the ball disc, the height of the disc edge, the rotation speed and the moisture are constant, the balls of different particle sizes roll downward from the edge of the disc at different disengagement angles due to different gravity. During the continuous rolling process, the ball continuously discharges the water in the ball out of the surface. Due to the cohesiveness of the material and the natural volatilization of the surface liquid film, the ball has certain strength, and then the disk is rotated with the tilting of the disk. The sides are discharged out of the pan.

Disc granulator performance advantages:
1. The raw materials are suitable for a wide range of applications. They can be used for granulation of various raw materials such as compound fertilizer, medicine, chemical feed, coal, metallurgy, etc., and can produce various concentrations and various types (including organic fertilizer, inorganic fertilizer, and magnetic fertilizer etc.) of compound fertilizer.
2. The disc granulator is light in weight, low in height, and flexible in process;
3. The machine has simple structure, convenient adjustment and superior performance.
4. The use of unique unpowered combination scraper integration reduces auxiliary power consumption.

No comments were found for The working principle of the disc granulator in the fertilizer production line. Be the first to comment!