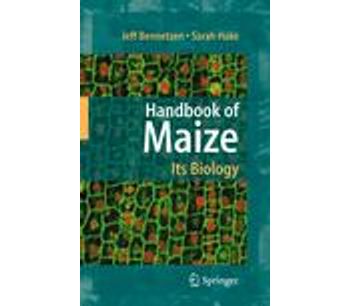 Handbook of Maize: Its Biology

0
Share Share with Facebook Share with Tweeter Share with LinkedIn
Jan. 1, 1900
Maize is one of the world’s highest value crops, with a multibillion dollar annual contribution to agriculture. The great adaptability and high yields available for maize as a food, feed and forage crop have led to its current production on over 140 million hectares worldwide, with acreage continuing to grow at the expense of other crops. In terms of tons of cereal grain produced worldwide, maize has been number one for many years. Moreover, maize is expanding its contribution to non-food uses, including as a major source of ethanol as a fuel additive or fuel alternative in the US. In addition, maize has been at the center of the transgenic plant controversy, serving as the first food crop with released transgenic varieties. By 2008, maize will have its genome sequence released, providing the sequence of the first average-size plant genome (the four plant genomes that are now sequenced come from unusually tiny genomes) and of the most complex genome sequenced from any organism. Beyond its major agricultural and economic contributions, maize has been a model species for genetics since it was the first plant to have a genetic map, initially published by Emerson and colleagues in 1935. Such central genetic phenomena as telomeres, nucleolar organizers, transposable elements and epigenetic gene regulation were all discovered first in maize, and later found to be universal eukaryotic genome properties. These central genetic contributions continue, including the characterization of the structure and evolution of complex plant genomes. Among plant science researchers, maize has the second largest and most productive research community, trailing only the Arabidopsis community in scale and significance. At the applied research and commercial improvement levels, maize has no peers in agriculture, and consists of thousands of contributors worthwhile. A comprehensive book on the biology of maize has not been published. In 1999, Peterson and Bianchi published 'Maize Genetics...

No comments were found for Handbook of Maize: Its Biology. Be the first to comment!