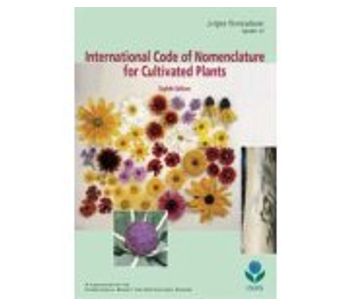 This eighth edition of the International Code of Nomenclature for Cultivated Plants (2009) replaces the seventh edition of the Code which was published in February 2004 as Acta Horticulturae Vol. 647 and as Regnum Vegetabile Vol. 144. The organisation of the Fifth International Symposium on the Taxonomy of Cultivated Plants held at Wageningen, The Netherlands from October 15-19, 2007, provided a focus for the International Commission members charged with revisions of the ICNCP to meet to consider proposals to amend the Code and to prepare a further edition to take into account the changing needs of users while ensuring that the basic Principles on which the Code is based are not compromised. Prior to this Symposium requests for suggestions to amend the 2004 (Toronto) Code were sought from many interested individuals and organisations between 2006 and 2007 so that a very wide a range of views and opinions could be obtained for consideration by Commission members.

Price:
€ 30 not including shipping & handling, 20% discount for ISHS members

Some proposals were published in Hanburyana (Vol.1, 2006: Vol.2, 2007) while many other submissions were made by e-mail. These were all collated and reproduced in the book of Abstracts circulated to those attending the Wageningen Symposium as well as to all Commission Members. An open discussion on these proposals to amend the Code was held on the final day of the Symposium to obtain further input from delegates attending the meetings so that their views could also be considered by the Commission. The Commission members then met on the following two days in the Wageningen Herbarium building to discuss, and where appropriate, vote on all the proposals put forward to amend the Code. An Editorial Committee composed of C.D. Brickell (Chairman), C. Alexander, J.C. David, W.L.A. Hetterscheid, A.C. Leslie, V. Malecot and Xiaobai Jin was then appointed to carry out the final editing of the Code and to arrange for its publication. Initial work on preparing and editing the text of the new Code was carried out at Wisley by John David, Alan Leslie and myself using the recordings of the discussions as well as notes taken at the meetings by Janet Cubey. A draft was then forwarded to the other members of the Editorial Committee to check and approve before being circulated by e-mail to the full membership of the Commission for further comment and suggested amendments prior to publication. The Commission is indebted to the following individuals who have submitted proposals and suggestions for the revision of this Code since the 2004 Code was published :
Björn Aldén (Sweden); S. Bodegom (The Netherlands); Ž. Borzen (Croatia); D. Collins (USA); R. Cross (Australia); J.J. Cubey (UK); D. Donald (UK); K. Donald (UK); M. Dosmann (USA); M. Griffiths (UK); A. Hay (Australia); W.L.A. Hetterscheid (The Netherlands); M.H.A. Hoffmann (The Netherlands); C.D. Holetich (Canada); H. Iketani (Japan); J. Iles (USA); Xiaobai Jin (China); A.C. Leslie (UK); V.A. Matthews (UK); L. Miedema (The Netherlands); Yoko Otsuki (UK); G. Payton (USA); D. Ross (USA); J.M.H. Shaw (UK); R.P. Trehane (UK); R.G. van den Berg (The Netherlands); J. van Scheepen (The Netherlands); R. Spencer (Australia); F. Vrugtman (Canada) and C. Whitehouse (UK).
I would like to express the warmest thanks of the Commission to all these individuals as well as to those who took part in the Wageningen Symposium discussions. The input of all of them has been extremely valuable to the Commission in the preparation of this new Code. It will be noted that since the publication of the 2004 Code a number of members have retired from the Commission and I would like to thank them for all their work for ICNCP over the years they have been involved. Equally I welcome to the Commission the eleven new members who have already contributed greatly to the preparation of this new edition of the Code during the revision process from their wide international backgrounds in cultivated plant taxonomy. The task of the Editorial Committee was also made very much easier by Dr Janet Cubey who acted as Editorial Committee Secretary and coordinated very calmly and efficiently all aspects of the long editorial process. On behalf of all the Commission members I thank her very warmly for her great help in the preparation of this new edition of ICNCP. In addition Patty Boardman and Richard Sanford contributed greatly in the preparation of the Code, by assisting with the Appendices and Indices in particular. Again I express my warmest thanks to them for their help. Finally, my grateful thanks to all the members of the Editorial Committee who have worked so hard to bring this eighth edition of the International Code of Nomenclature for Cultivated Plants to a successful conclusion. Proposals to modify this Code will, when possible, be published in Hanburyana and should be sent to The Chairman, The Editorial Committee, ICNCP, c/o The Royal Horticultural Society`s Garden, Wisley, Woking, Surrey, GU23 6QB, UK or by email to icncp@rhs.org.uk. Chris Brickell, Chairman, IUBS International Commission for the Nomenclature of Cultivated Plants and Chairman, Editorial Committee, ICNCP.

No comments were found for International Code of Nomenclature for Cultivated Plants. Be the first to comment!