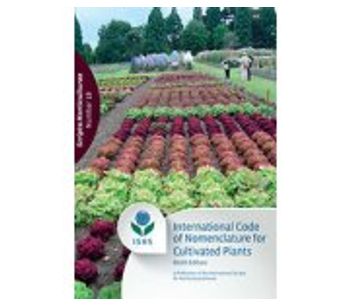 This ninth edition of the International Code for the Nomenclature for Cultivated Plants replaces the eighth edition of the Code which was published in October 2009 as Scripta Horticulturae Number 10 and as Regnum Vegetabile Vol. 151.

Price:
€ 30 not including shipping & handling, 20% discount for ISHS members

This new edition derives from decisions taken at a meeting of the IUBS International Commission for the Nomenclature of Cultivated Plants held over 20–21 July 2013 in Beijing, China. Prior to this meeting requests for suggestions to amend the previous Code had been sought from all interested parties and some of these proposals were published in Hanburyana (Vol. 5, 2011, Vol. 6, 2012 and Vol.7, 2013).

All the proposals that had been submitted were collated by Janet Cubey and forwarded to the Commission Members in advance of the meeting, so that those not able to attend could make their opinions known. Copies of the proposals were also circulated to all those attending the Sixth International Symposium on the Taxonomy of Cultivated Plants, which had been held on 15–19 July in Beijing, immediately prior to the Commission meeting.

An open discussion on the proposals was held on the final day of the Symposium.

At the Commission meeting all the proposals to amend the Code were discussed and where appropriate were voted on by those present. The views of those members unable to attend, as well as opinions expressed by those attending the Symposium, were conveyed to the meeting. At the meeting in Beijing we also benefited from the attendance of three observers whose invited contributions were much appreciated. These were: Yolanda Herta (UPOV, Switzerland), Jean Maison (CPVO, France) and Natalie Iwanycki (Royal Botanical Gardens, Canada). At the conclusion of the meeting an Editorial Committee was appointed to carry out the editing of the Code and to arrange for its publication. The Editorial Committee consisted of Chris Brickell (Chairman), Crinan Alexander, John David, Marco Hoffman, Alan Leslie, Valéry Malécot and Xiaobai Jin, with Janet Cubey as Editorial Committee Secretary.

The Commission is very grateful to the Beijing Forestry University and the conveners of the Symposium, Qixiang Zhang and Xiaobai Jin, for providing facilities and hospitality for the Commission meeting.
Initial work on preparing the new edition was carried out at Wisley by Janet Cubey, John David, Alan Leslie and myself, using transcribed recordings taken at the meeting, as well as the notes taken by the Editorial Committee Secretary. Drafts were forwarded to other members of the Editorial Committee and following further discussion and debate a final version (together with a request for an additional vote on the provisions of Art. 34) was circulated to the full Commission membership for further comments and suggestions prior to publication. I would like to thank Xiaobai Jin in particular for his meticulous attention to detail, which has been extremely helpful during the editorial process.

I would like to express my gratitude to all these individuals, as well to those who took part in the Beijing Symposium discussions or have subsequently assisted us in preparing this new edition of the Code. Richard Sanford (RHS, Wisley) in particular has played a significant role in the preparation of this Code, notably in the preparation of both the Appendices and the Indexes. Janet Cubey and John David have both contributed significantly to ensuring the administration of the long editorial process was conducted efficiently and I am grateful to them for their efforts.

Since the last edition of the Code we have welcomed two new members: Dr Marco Hoffman, who joins us as the new Commission Secretary, and Janet Cubey, both of whom have already demonstrated their value to the Commission. Two members have stood down from the membership: Dr Wilbert Hetterscheid (our former Secretary) and Dr Niall Green. I am most grateful to them all for their contributions to the Commission.

This will be my last foreword as Chairman of the Commission and I would like to express my gratitude and warmest thanks to all the members of the Commission with whom I have worked over the years both in the preparation of the Code and promoting its application to cultivated plants worldwide.

Proposals to modify this Code will, when possible, be published in Hanburyana and included on the HORTAX website. They should be sent to The Chairman, The Editorial Committee, ICNCP, c/o RHS Garden Wisley, Woking, Surrey GU23 6QB, UK or by email to icncp@rhs.org.uk

No comments were found for International Code of Nomenclature for Cultivated Plants, Ninth Edition. Be the first to comment!