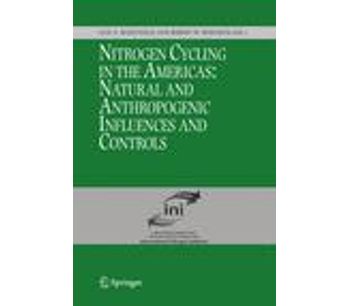 Nitrogen Cycling in the Americas: Natural and Anthropogenic Influences and Controls

0
Share Share with Facebook Share with Tweeter Share with LinkedIn
Jan. 1, 1900
The rate of creation of reactive nitrogen (NR) on the earth has dramatically increased in the last half century mainly due to the production of N-fertilizer through the Haber-Bosch process, fossil fuel combustion, and the cultivation of plants that fix N from the atmosphere. The anthropogenic production of NR has been especially high in developed countries of the temperate zone, such as the USA and Canada, where severe eutrophication of estuaries and coastal zones, acidification of lakes and streams, loss of biodiversity, and reduced forest productivity have become common environmental problems associated with increasing nitrogen loads to ecosystems. However, important drivers responsible for the increase of the production of NR in the temperate zone are increasingly influencing the nitrogen cycle in rapidly developing regions of the world, such as the Tropics and Sub-Tropics, including most of the countries of Latin America and the Caribbean. Advances in our understanding of the nitrogen cycle and the impact of anthropogenic activities on regional to global scales depend on the expansion of scientific studies to these fast-developing regions. This book presents a series of studies from across the Americas whose aim is to highlight key natural processes that control nitrogen cycling as well as discuss the main anthropogenic influences on the nitrogen cycle in both the tropical and temperate regions of the Americas.

No comments were found for Nitrogen Cycling in the Americas: Natural and Anthropogenic Influences and Controls. Be the first to comment!