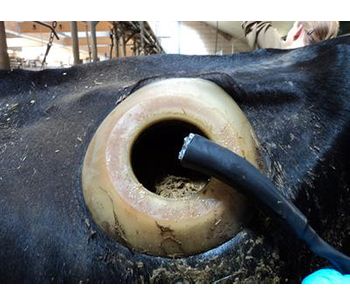 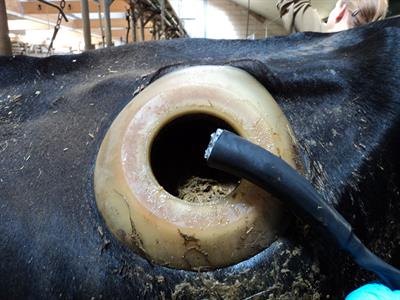 In the modern age rumen monitoring is common practice in managing high yielding dairy herds but a long road lead us to where we are today. In 1822 an extraordinary medical occurrence allowed us a unique insight into the human digestive tract. An American army surgeon found that a wound in a man’s abdomen that refused to heal allowed direct observation of his stomach with no apparent adverse effects to his health (Beaumont 1833). Using this knowledge, 11 years later the first recorded scientific fistulation on an animal was performed, with wide spread use of fistulation appearing in the 1920s. Currently fistulated cows with a freely removable plug in their side are common in scientific research, although less invasive and expensive methods are rapidly becoming cheaper and more reliable.

The first in vivo measurements of pH inside the rumen of a cow was performed in 1941 using fistulated cows (Smith 1941) where the conditions of the rumen, such as the pH range, were first described. This was followed in 1955 by continuous measurements of pH using wired glass electrodes connected to external receivers (Lampila 1955).

Other methods for gaining access to the rumen environment include rumenocentesis (rumen puncture) and oro-ruminal probes. Techniques for rumenocentesis were first developed in 1994 (Garrett 1994) and involve extracting ruminal fluid using a large needle injected through the skin directly into the rumen. While rumenocentesis provides rumen liquor from a practically undisturbed rumen, rumen pH varies across the rumen at a static point in time and therefore it is all too easy to get inaccurate results from extracting fluid from a slightly different location each time. Oro-ruminal probes were explored in 1993 (Geishauser 1993) by feeding a pH sensor connected to a long tube down a cows throat into the rumen.  However, readings provided by these methods are often subject to saliva contamination and, as saliva naturally acts as a rumen buffer, any contamination with saliva will quickly give an inaccurate description of the conditions within the rumen.

In 2001 Toby Mottram was asked by a major pharmaceutical company to develop a bolus to wirelessly measure pH in the reticulum. Although the project was eventually cancelled, bolus R&D continued and in 2007 boluses were shipped to Brisbane where they were tested. Using the results, the paper “A wireless telemetric method of monitoring clinical acidosis in dairy cows” was published in 2008.

The biggest problem in pH monitoring was and still is to maintain the accuracy of the sensors base line which tends to shift over time.  The best way to achieve this, which was patented (GB0719740.3) by eCow in 2007, is to use a high quality pH glass bulb electrode and to maintain its orientation downwards using a weighted bolus. Currently the farmBolus is produced regularly and shipped worldwide with customers as far reaching as California and Japan.

There have been multiple variations produced by other companies on the wireless bolus method of gathering data from the rumen but the eCow bolus was the first and, we believe, the best method for reliably and accurately collecting data in order to produce the best dairy herd you possibly can.

No reviews were found for Rumen Monitoring Service. Be the first to review!