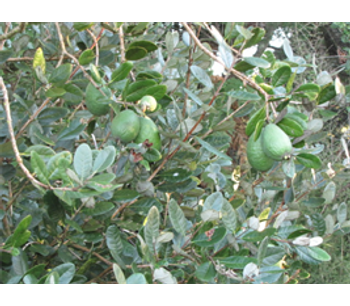 If you want to still believe that winter is not imminent, then one thing that will reinforce this notion is to have fresh fruit in your garden. I know fresh fruit is always available in the supermarket, either as cool stored or fresh imported but that really shouldn't be put up against garden fresh! The garden fresh fruit I'm talking of is the feijoa.

This plant fruits from late autumn into early winter and a mature plant can supply litterally bucket-loads of fruit.

Originally, a native of South America, The feijoa was collected in southern Brazil by a German explorer Freidrich Sellow in 1815 and introduced to Europe by a French botanist and horticulturist, in 1890. It was named after Brazilian botanist, Joam da Silva Feijo. Feijoas were introduced into New Zealand in the 1920's.

Feijoas are very hardy and versatile fruit trees, which require a minimum of care once established. The feijoas that are in circulation are all descendant from a single collection of material that went back to France with some of the early explorers, and then spread around the world. Some time in the 1980s other researchers went back to Central America and were unable to find anything significantly different to what is in cultivation today.

Mother Nature got it right.

It isn't common for plant breeders to admit it, but the benefit for growers is this natural vigour continues through to plants you can buy now. The named cultivars are the result of natural selection by growers.

New Zealand's ideal climate produces large fruit, and with few pests or diseases enables feijoa's to be grown organically. The feijoa I grow in my orchid gets no care or attention save a good fertilise every year. If I do forget to fertilise the plant the yield is significantly lower as you would expect given the amount of crop that is harvested each year. The New Zealand fruiting season runs from late March to June. Feijoas are ready to eat when slightly soft and when the jellied sections in the centre of the fruit are clear. Depending on the variety this may happen on the tree or within 2 -5 days of natural fruit drop. If we have a windy night it pays to get out and collect the fallen fruit before the birds or rot gets them.

The taste of the fruit is very distinctive with an aromatic flavour of pineapple, quince, lemon and a bit of eucalyptus. In California, the fruit is known as pineapple guava. Serve sliced in fresh fruit salads, blend frozen with other fruits for a fruit sorbet or garnish with roasted meats.

Packed with Vitamin C, high in fibre and low in fat.

What more could you ask for an easy care fruiting plant that delivers year after year and supplies you with fresh home grown fruit when the rest of the garden is starting to look a little bare.

No reviews were found for Autumn Fruiting Marvel. Be the first to review!