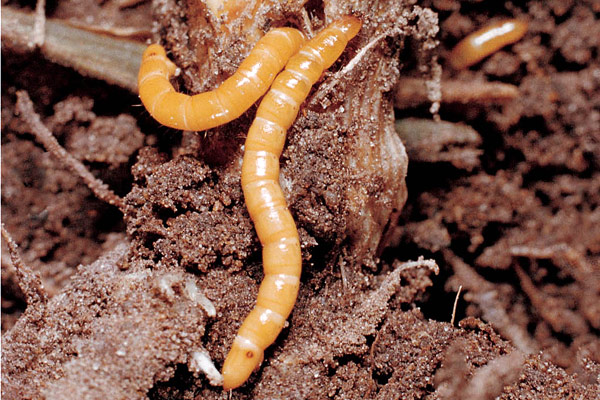 The species of this genus are typical members of the family Elateridae: the body of the adult is about 7-10 mm (0.27-0.29 inch) long, narrow, flat, and brown to black in color. The larvae are thin and long (up to 30 mm; 1.18 inch), and they have an uncommonly hard yellow to light-brown body.

The adult beetles do not cause damage. As reflected by the common name, the larva is the economically important, destructive stage. It normally lives underground, feeding mainly on roots and tubers of numerous different plant species. In potatoes, beets etc. it bores sharp-edged, deep holes of ca. 3 mm (0.12 inch) diameter, especially in dry periods, thereby rendering the product unmarketable. Secondary infection by fungal and bacterial diseases frequently increases the damage further. Germinating seeds attract the larvae by their emission of CO2, and the hypocotyl is often destroyed before emergence, e.g. in beet.

Most damage occurs on roots; sometimes these are completely bitten off, so that even older plants can easily be pulled out. In their young stages, even woody plants are at risk, e.g. in nursery plantations. Seedlings can also be attacked by gnawing near the soil surface.
In all cases, the vascular bundle becomes interrupted- and thereby the supply of nutrients and water - causing the plant to develop slowly, wither and eventually to die.

The larvae often attack several plants each, so the damage (which first becomes visible by yellowing of the central leaves in grasses and cereals) appears in patches.

The genus Agriotes contains several species (some of them very difficult to distinguish) which are broadly similar in their biology. They prefer humid climates and are mainly found in Europe and the former USSR. In North America, other members of the Elateridae are known as 'wireworms', but introduced Agriotes spp. have been gaining importance for some years. In Europe, A. lineatus and A. obscurus are the predominant species.

An unique characteristic of the Elateridae is the ability of the adults to catapult themselves up into the air after having fallen on their backs.
Preferred habitats are grasslands such as meadows, pastures etc., but fallow land, and sometimes fields with clover, cereal or alfalfa can also be occupied. The oviposition sites invariably have moist, heavy soil.

In late spring or early summer, the females lay about 170-200 eggs a few cm deep into the ground. After 4-6 weeks the larvae hatch.
Their complete development takes place in the soil, and it lasts 3-6 years. Wireworms are sensitive to desiccation, so they move vertically in the ground according to seasonal weather changes. They are only moderately influenced by temperature though.

The larvae have two main feeding periods each year during the times when they are nearer to the surface, which is in spring and in late summer or early autumn. If necessary, they can go without food for months. They cause most damage during the second and third years of their development.

They pupate in summer at depths of about 20-70 cm. The adults emerge after some weeks, but they overwinter in their pupal cells and do not come out of the soil until the spring (April/May). While both sexes can fly, the females rarely do, but rather walk around actively, witha range of several meters.

Under favorable conditions, e.g. in damp meadows, high population densities can occur. When this land is tilled, the wireworms turn to the freshly-sown or -planted crops in the absence of grass roots. Due to the long larval development time, it may take several years until the infestation abates.

Agriotes spp. are considered to be among the major pests in Europe. Damage to grain seedlings so severe as to require replanting has been reported. In root legumes or potatoes, up to half of the harvest can occasionally be lost.

Tillage at times of peak activity of the larvae and careful choice of crops for rotation can reduce damage significantly.

No reviews were found for Bayer - Agriotes spp. Be the first to review!