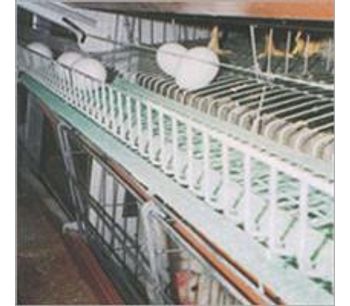 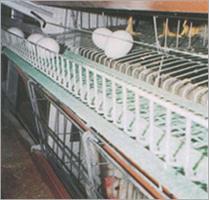 This Hosoya cage system offers a variety of advantages, that make Mark II a high-flier for the 21st century. The A-line pyramid tiered battery eliminates the use of droppings removal belts as a first of its numerous benefits.

This outstanding feature ensures the smooth convection of air and kills an otherwise risk of hens being infected with cocosidiosis by rotating manure belts.

Robust feed troughs are arranged in a formation of ladder and worker can easily reach even the topmost cage to remove carcasses or replace hens.

Due to the cage system being more stable, it is even resistant to earthquakes.

Standard equipment for the The stairs layer cage system is a special manure removal device, that cleans batteries with scrapers independently from each other, the already mentioned feed troughs, reinforced with iron sheets to use as a ladder, an egg saver and a n egg collecting system.

In addition to these standard components there is optional paraphernalia.

Optimizing calcium feeding is not an easy job but Hosoya's Poultry Research Farm found a formula to reach this goal making egg shells denser and harder.

The second optional device is the egg flow control system that stores the egg-laying rate of a day everyday in order to control the speed of the egg-collection conveyer belts.

This prevents the belts from accidental stop for the minimization of broken eggs and increased egg-collection efficiency.

No reviews were found for Hosoya - Stairs Layer Cage System. Be the first to review!