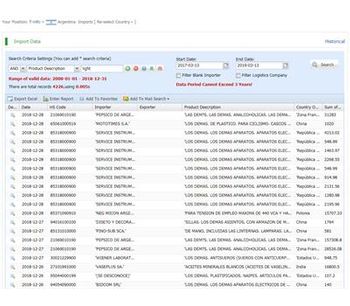 On March 13, El Pais reported that the Argentine government is preparing a list of 100 imported goods, aiming to raise import tariffs on these goods. The list will be presented this week and then submitted to the three other members of Mercosur (Uruguay, Brazil and Paraguay) for approval, the report said.

The move to raise import tariffs is based on the agreement reached at the December summit of the south China trade and economic cooperation (SADC) that, in order to resist the impact of the global economic crisis, SADC member countries can increase import tariffs on 100 goods on the basis of common external tariffs, which is within the range of 35% stipulated by the WTO.

A series of trade protection measures recently adopted by the Argentine government have aroused the dissatisfaction of some Latin American countries in and outside the Mercosur. Some enterprises in the automobile, clothing, food and printing industries in Uruguay have stopped production because of this, and more than 700 people have been laid off to eat social security. The government has made representations to the Argentine side on many occasions. Chile, Peru, Colombia and Mexico are also preparing joint appeals against Argentina's import restrictions.

NCB data also have a professional supporting team. The team the product tool tutoring, problem-solving, data maintenance, which may enhance the service quality and provide extra value to the clients.